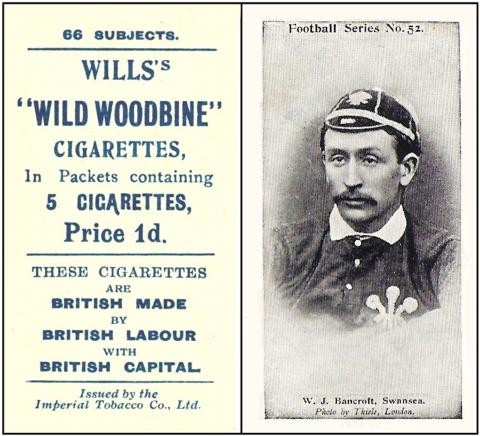 Thursday 21 October
W675-114 [tobacco : UK] W. D. & H.O. Wills "Football Series" (1902) 52/66 - now this is "football" but it includes rugby as well and here is W.J. "Billy" Bancroft, of Swansea. Billy must mean that the "W" was William. You can see a larger photo of him, and some biographical details, at https://www.peoplescollection.wales/items/33698
The card says that the photo is by "Thiele London", who was actually a very famous photographer Karl Anton Reinhold Thiele, usually known as just Reinhold Thiele, or, as in our case, just Thiele. He was born in 1856 in Hamelin, in Germany and relocated to England in 1878. This is not his only claim to cartophilic fame, check out https://www.npg.org.uk/collections/search/person/mp09665/karl-anton-reinhold-thiele
He died in 1921.
This set was originally coded as W/22 and it appears in the first ever Wills Checklist style reference book. There are two different backs, this "Woodbines" and a "Cinderella".  It was once thought that this set was identical to another set issued by Clarkes, but later research proved that there were differences.