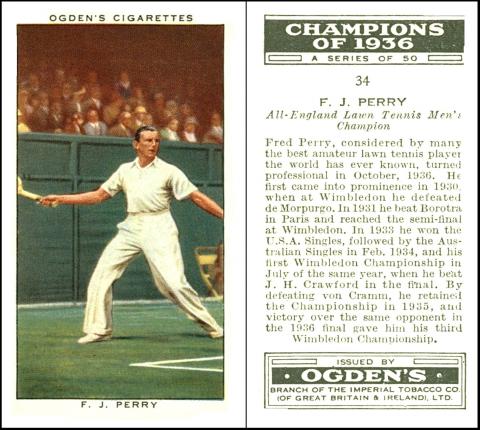 Another sartorial star, also associated with shirts, here is Frederick John Perry, or Fred Perry, who was born on May 18, 1909 in Stockport, England.

He was a triple champion, and founded his fashion empire in 1952 on a tennis shirt he designed himself. He was no crocodile, and his emblem was a laurel wreath.

After being a very eligible bachelor for many years, with some high profile companions, including Marlene Dietrich, he became engaged in 1934 to an actress called Mary Lawson, but this did not survive his relocation to the USA. A year later he met the film star Helen Vinson, on the S S Berengaria, it was her second marriage, but again it did not last and they divorced in 1940. He married again, twice, in fairly quick succession, then after a bit of a break he found happiness with a lady who was actually the sister of Patricia Roc. They were married in 1952 and remained so until his death in 1995, in Australia.

This set was also issued by Hignett