Lets start with some eyes.....

This was a great one in our recent auction, issued by Fry`s Chocolate...

but actually it was not a new idea as over in America, smokers of Kinney Bros products had seen it all before, because in 1889 they had issued "Jocular Oculars" . That is a very grandiose way of saying "humorous eyes", without the rhyming.

Now this block was published in The Cartophilic World magazine Volume 15, No.164, issued in March April 1963, accompanied by the text which we insert below 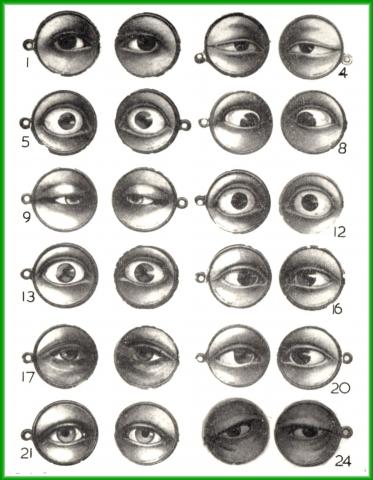 There is another difference, as our World Tobacco Issues Index, under reference K524-180 tells us that the twenty four printing has a brown border and the twenty five a blue border. If you look at https://duckduckgo.com/?q=kinney+jocular+oculars&t=brave&iax=images&ia=images you will see that this means on the front of the card.

Now if you have a better "eye" for spot the difference than me (not hard) do have a look and see if you can solve the mystery of the twenty fifth card. And there are absolutely tons of links off this page for you to examine!

Before we move on, the thing you may not immediately notice is that these were not just circles cut out by a machine, or if they were it was a very clever machine, for there is a small circle at the side which showed where the handle of the monocle or the arm of the glasses fitted, so these must have been cut by hand. You may also see that in some cases the small piece is missing, worn off or broken off by handling.

Go gentle with those cards now!