Congratulations to Her Majesty the Queen on her Platinum Jubilee

Our Cartophilic Celebration will continue, adding in several of our own personal treasures, but let us start with this most unusual cover.

Note the red white and blue of the header box, and that the framelines are tiny crowns.  You may think that this was a grand departure for our magazine, to have an actual Coronation Number, but it is a symbol of how keenly the event was followed, especially as, and maybe because, we were still actually under rationing! A very intriguing point is that this was our first Coronation, for when George VI was crowned we did not exist. However the London Cigarette Card Company did, so I will go do some delving and see how they celebrated that.

There must have been a few comments at the time because the following edition (“The Cartophilic World” Vol.10 No.106 July-August 1953) contains a little note to reassure the readers that "While on the subject of the production costs of our journal, I feel sure members will be gratified to learn that the extra cost of our Coronation number, (due to the two-colour cover, the portrait of H.M. The Queen, and the extra four pages) was borne by the President and Members of the Council as their personal contribution to the occasion."

The portrait was this:

And Of course the Coronation all began sadly, as reported “The Cartophilic World” Vol.9 No.98 March-April 1952 in Mr. W. J. Wicks` regular column, “The Assistant Editors Note Book”, on page 1119, which started with this black bordered obituary for H.M. King George VI

The dotted line just stands for omission, as this list of cards, which must have taken some hasty sorting outs, was further down the page. Two of those cards, (the Mitchell and the Wix), have been featured this week as “Cards of The Day” but we will endeavour to find links to the others and include them here.

This was an interesting idea mooted by Commander Rundle, and though not published until a few months before the Coronation, we must allow for some gap between the writing and the publication, especially when articles were submitted by stamp not by internet. Therefore we can but wonder if it was the catalyst that spurred on the issue of any of the commemorative sets...

And so we return to our Coronation issue, for further inside is another article, this one, written by Mr. M. L. Horn, one of his last, as he died on 18th August 1953, after an operation. 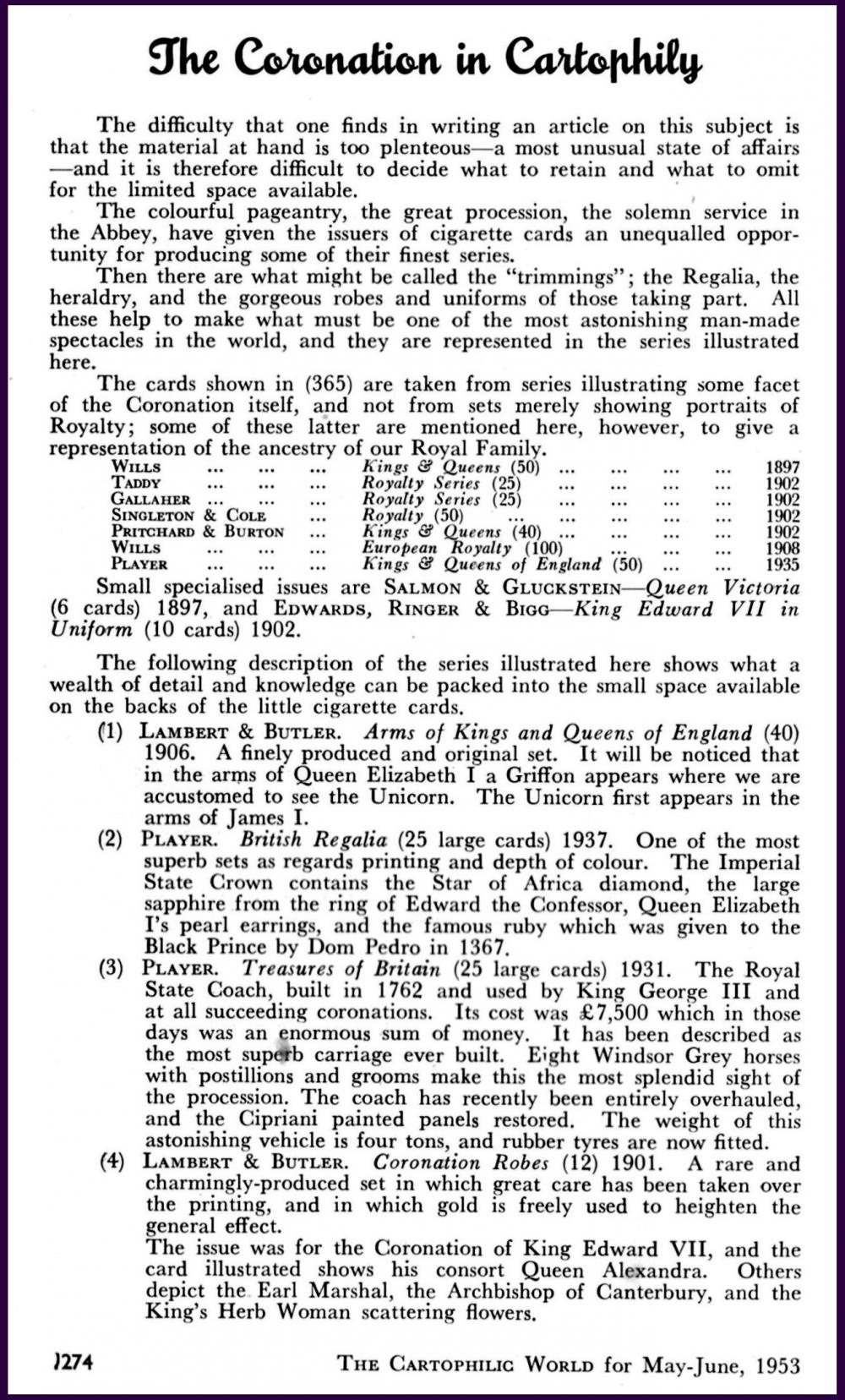 You may have noticed that this does not actually deal with the Coronation of Elizabeth II, though Royal enthusiasts will pick up that some of the items mentioned were used at her Coronation as well, chiefly the State Coach, and the Throne. Then at the end it states that “It is unfortunate that no card has recently been issued showing Queen Elizabeth II”.....

However, later in that very magazine come the first issues which do indeed show the Coronation of Queen Elizabeth II, both trade rather than tobacco, and the first of all to be recorded was this :

This set was first listed as BRH-16 in our British Trade Index part two. It says very little, less, in fact, than the mention in the magazine, only "Coronation Information Sm. Nd,. (44)" It is a shame that this was just text, but it deserves a mention nonetheless, and actually there were quite a few sets of text only cards issued by this company, including a huge set of about two hundred different cards that were all joined together and given the adopted name of "Fortunes, Horoscopes, Quotations" (BRH-17).
British Automatic Company Ltd had addresses in Birmingham, Bristol, Dublin, Glasgow, and Manchester, plus headquarters in Appold Street, London. They had been in business since 1887 but had changed their name in 1910. They primarily made weighing machines, the sort that used to be on every station, and from where these cards were dispensed, but they also made a variety of amusement and vending machines, including fortune tellers (from where the fortune cards had come) and embossing presses which made metal labels and name plates.

The next issue listed was :

A & B.C. Chewing Gum are a very well known issuer, especially in the areas of football and film/tv. This set does not appear to be listed in our original trade indexes, but maybe I have missed it. Do tell me the code if you can spot it!

“The Cartophilic World” Vol.10 No.106 July-August 1953 contains more new issues, starting with this lengthy piece on the latest issue by Allman 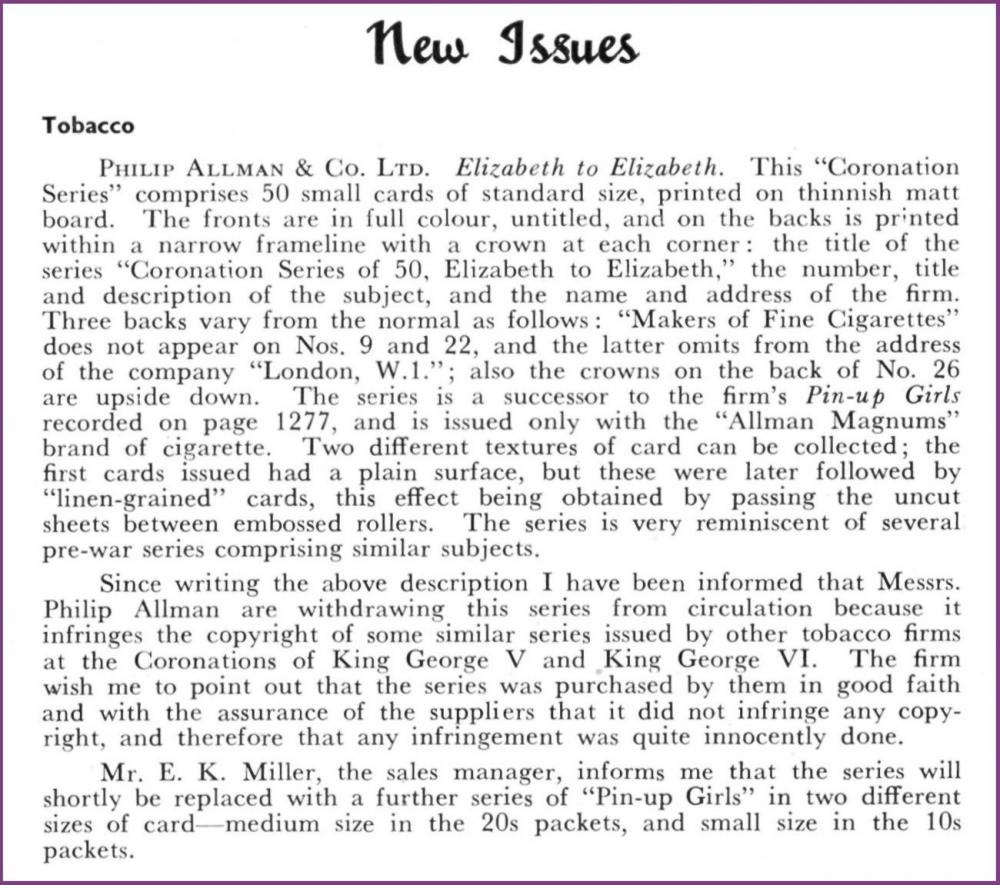 We featured a card from this set as our card of the day on Friday the 3rd of June, where this information, and the clipping, also appears, but you can view the card as well. Or you can see an entire set at the New York Public Library, where it is part of the Arents Collection. Remember that clicking on any front will take you to a new page with a larger version of the card, and  you can also click on the back to enlarge that too. Looking at the gallery, the card that leaps out at me is the glove, but if it does nothing for you, just see what I mean here.

The second new issue listed there is this:

This is very strange, because there seems no other record of this so called “paper insert slip”, however it does seem to have a Royal connection in showing Osborne House, an address beloved of Queen Victoria, and it does not seem inconsequential that it appeared around the time of the Coronation of Queen Elizabeth II. We have found out a little bit about The Osborne Tobacco Co. Ltd, but not much, pretty much only that it had addresses in Portmouth and in London, but that is gleaned from the single issue listed underneath the insert in our magazine, which does appear in both our original World Index of 1956 and our updated Millennial version, but is nothing to do with the Coronation. This is O700-500 : O/31-1 “Modern Aircraft”, issued in 1952. But we have found out by searching online that its brands included “Crinoline Perfumed Cigarettes” and “Park Royal”. Any more information would be very gratefully received.

Thirdly we have this

M857-500 : M139-1 [tobacco : UK] Moorgate Tobacco Co. Ltd “The New Elizabethan Age” (1953) was a set of thirty black and white cards, split between twenty standard sized cards of 65 x 38 m/m and ten large cards of 75 x 55 m/m. These also followed the trend of the age by being issued as (a) matt cards or (b) varnished ones. Moorgate Tobacco Co. Limited seems to have become a company in January 1936, but is currently dormant, though they are still submitting annual reports. There seems to have been quite a few shauries with Phillip Morris over copyright infringements. One of their most popular brands was “Planters”, a packet from which can be seen over at Flickr

These were all the tobacco issues. Under the trade section we have these though - starting with

BFG-2 Beaulah “Coronation Series”, a set of twenty-five small size cards, measuring 65 x 37 m/m, and numbered. J. J. Beaulah made canned fruit and vegetables, and were based in Boston, Lincolnshire.