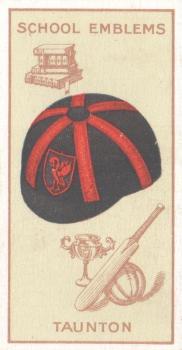 Our featured card is 'Taunton' (no.23) from the Carreras School Emblems set of 1929.

Our much missed West Country Branch was founded in 1973 by Peter Wood, newly moved to the area, who started off as both Club Secretary and Treasurer.

By 1982 we were holding bi-monthly meetings in Bath. We have found a notice of the Sunday 4 April 1982 one, where it reports we were pleased to welcome two visitors who had travelled from Newbury, and a local man from Batheaston who had just joined the Branch. The meeting was being held in the same venue they had been using for their Rallies, the Skittle Alley at the rear of the Royal Oak Public House; this was either reached through the public house, or by a service road at the side. The Skittle Alley was a bit larger than where they had previously held the ordinary meetings; we are not sure where that was. Yet. Their next Rally was announced as 3rd October.

Though based in Somerset, the branch met at various venues including Taunton, Bath, and latterly at the Grade II Listed “Conservative Club” in Keynsham High Street, where meetings took place on Sundays from 2.00pm-5.00pm.

Their annual rally was held at the Community Centre, in Yate, near Bristol. And they co-hosted the Cartophilic Society Convention at that venue in 2001.

Peter Wood retired as Secretary in 2006, and was deservedly made a Life Member of The Cartophilic Society.

At the Woking Convention in 2013, it was announced that the branch was closing. The reason for its closure was a lack of collectors with time to assist with general organisational duties.