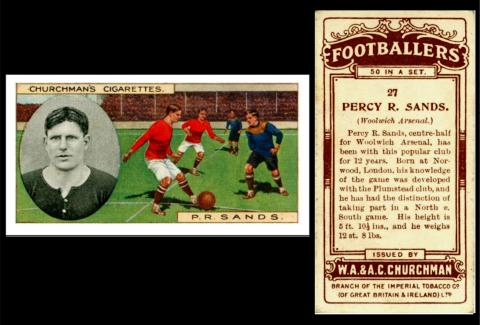 Now there is a spot of confusion over this set because some time in early 1914 a set of cards were issued by Churchman, and they showed portraits of footballers, but they did not have a title on the cards; as you might imagine, one had to be found so they could be recorded, so they went down as “Footballers” (A), the (A) standing for adopted title.

However in November 1914 along comes this set, also by Churchman, and would you believe it, it is titled “Footballers”. Luckily the fronts on these were not just portraits, so we were able to tack on an extra bit and say this set is either “incidents in play with inset of player” or “coloured action portraits with black and white portrait inset”. And how we know that this set came second is quite simply that we would have straight away called the untitled set something else other than “Footballers” all over again.

Our subject is Percy R. Sands (as in Sands of the Desert, our first clue) and he played for Woolwich Arsenal. He also appears on other cards :