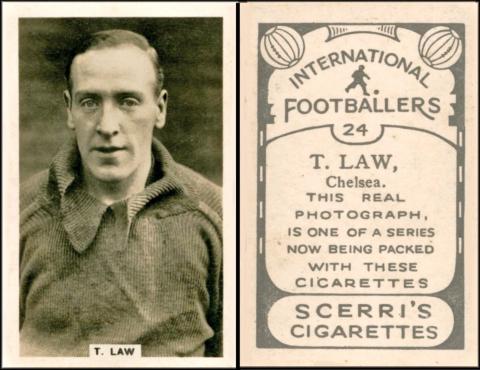 The clue here was the team, Chelsea, whose nickname is now The Blues. In our Monday round up, we asked if you, without looking, knew what they were nicknamed before this? And the answer was The Pensioners. We also asked when they changed, and that was in 1952, so at the time of this card they were actually not The Blues.  In fact if you look at Ogden and Hignett “A.F.C. Nicknames” the caricature is a pensioner. You can see that at the New York Public Library/AFC Nicknames However there is rather a strange fact on the back of this card, because it says “The Chelsea colours are royal blue, and occasionally the cry “Play up the Blues” is raised,…”

The person who changed the name was Edward Joseph Drake, perhaps he was in the crowd or on the pitch and liked that name better? He appears on several cards, though you have to hunt a bit as he is on as Ted Drake as well as E. Drake and E. J. Drake.  You can see a great selection of these at the trading card database / E. J. Drake

Chelsea was founded on March 10, 1905 by a man called Gus Mears, who already owned an area of land called Stamford Bridge. One story goes that he really wanted to call his team Fulham, but someone else had got there first, by some years, as what would become Fulham F.C. was founded in 1879 as St Andrew's Cricket & Football Club, and yes, St. Andrew`s was a Church. However, this is not totally true as Mr. Mears offered to lease this ground to Fulham, but when they said no, he probably thought well I have a ground I may as well start my own team to play in it. And he did.

Thirty years on from that, we have our card showing T. Law of Chelsea, on a card issued in Malta. Sometimes their cards say Scerri`s Cigarette Factory, or Scerri`s Cigarettes, or they have but brand names, “Black Spot”, “Senator”, or “Galata and Senator” combined. Our cards are sized at 56 x 35 m/m, and, like most of their cards, are black and white photos, though some have toned to brown. This set is the most sought after of all Scerri sets, most probably because it is football related. And you can see all the cards courtesy of Cardhawk Uk / Scerri - even the most sought after card in the set, number 17, which is S. Mathews of Stoke City. They mis-spell it on both sides! However, sadly, this was the final set of cards by Scerri’s.

There are other cards of Tommy Law though, and if you look at United Services Manufacturing Co. Ltd`s “Popular Footballers” 45/50 (1936) you will see we have come full circle, as the text reads “Was transferred to Chelsea in 1925 and helped “The Pensioners” to gain promotion to the First Division in 1930….”  Thomas (or Tommy) Law seems to not have had too many photos taken, as the same or very similar photo is often used, in fact a portion of our photo is used by R & J Hill for their “Popular Footballers Season 1934-5” series A card 21. That text calls Chelsea “The Pensioners” too. Another colour shot appears multiple times, on
Ardath “Famous Footballers” (1934) 8/50, and on Godfrey Phillips “Soccer Stars” (1936) 6/50 and Godfrey Phillips “International Caps” (1936) 6/50, though the entire text of these two cards is identical to each other as well, only the title and the bottom symbol differs! In fact Gallaher “Footballers” red back (1928) 74/100 seems to be his only original card.