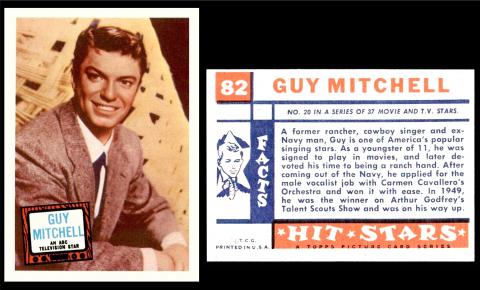 This card showed Guy Mitchell, born Albert George Cernik in Detroit, and one of his biggest hits, if not his biggest of all, was "Singing The Blues". If your YouTube works better than mine you can see him singing it on The Ed Sullivan Show

The song was released in 1956, in fact it was recorded by two other artists at almost the same time.

Guy Mitchell was a huge star in the 1950s, but according to our card he didn’t just make it overnight, he did several fairly strenuous jobs before hitting the big time.

These cards are not listed in our British Trade Indexes, but they are listed in the Burdick Catalogue, where we get the reference code above of R710.3. Codes R701 to R808 fall under “General Issues since 1948” and R710 is a group of Topps “Cards of Movie Stars and Entertainers” (TV, Radio, etc). Set 3 is our set and it is classified as : “Hit Stars, (37 Movie and TV Stars, 62 Recording Stars).” The confusion with our numbering is that the cards say 20/37, but Mr. Burdick tells us that “Only 88 cards, as some are classified in both categories”. I have to say the card reverse is very confusing because it does indeed say “No.20 in a Series of 37 Movie and TV Stars” without any mention of the Recording Stars. Actually, and more confusingly, there is another card of him in this main set, for he is also card “No.11 in a Series of 62 Recording Stars”, which you can see at the trading card database / Guy Mitchell

And Mr. Burdick valued the cards at .03 – that’s three cents each.