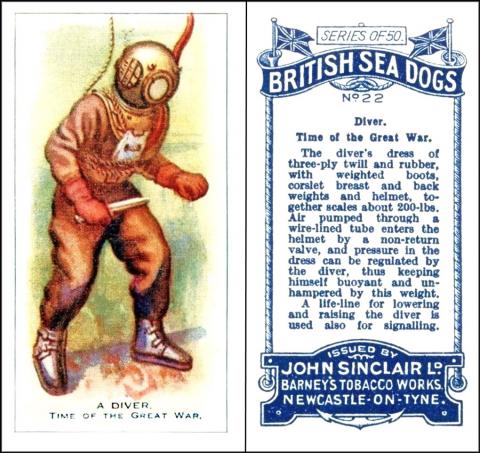 John Sinclair was based in Newcastle-on-Tyne, with premises in Bath Lane, and a factory called Barney`s Tobacco Works. No, I don’t know who Barney was – do you? I have found out that Barneys Tobacco was made for John Sinclair but Murrays took it over. It is no longer made though.

Anyway John Sinclair was founded in 1856, and claimed to be the first company to issue cigarettes in the North of England, under the brand name of “American Cocktail”; but surely cocktails only came along in the 1920s and 30s. The issuer Robert Sinclair, also of Newcastle-on-Tyne was actually a breakaway, their partnership being dissolved in 1885. this was one of the last sets they issued before they were acquired by Carreras in the 1930s. The set is a popular one and was reproduced in 1997.

It is quite unusual to have a card of a diver like this, but if you look hard you may find a few more. This one is especially interesting because it is stated to be “A Diver Time of the Great War”, and it is really hard to find any mention of divers during the conflict apart from just five, who you can discover at History.com  - is this card really one of those men?

There is a set of fifty cards which was issued by Victoria Gallery, these are called “Deep Sea Diving” and it is really hard to find out anything about them, I cant even find a picture of a back, but they look very interesting.