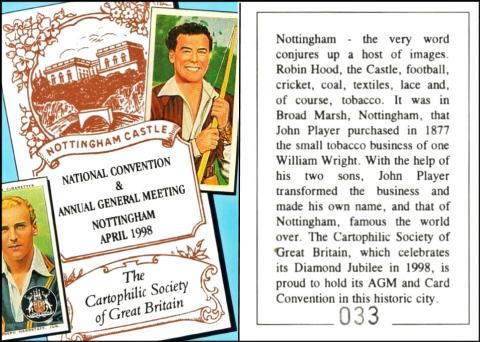 For the Sixtieth Anniversary of the founding of The Cartophilic Society we found ourselves at the Harvey Hadden Centre, and visiting Nottingham for the first time, even though the area has always been one of the spiritual homes of Cartophily, as the home of John Player, and the castle on the hill which featured so prominently in its advertising is visible from most of the surroundings. Nottingham and East Midlands Branch were hosting. As a quick Society Round up Ted Knight was President and Tony Gardner doing an amazing job, in fact because of his success at Cheltenham in 1995 as part of the Cotswolds Branch, he had become Convention Organiser for the entire Cartophilic Society.