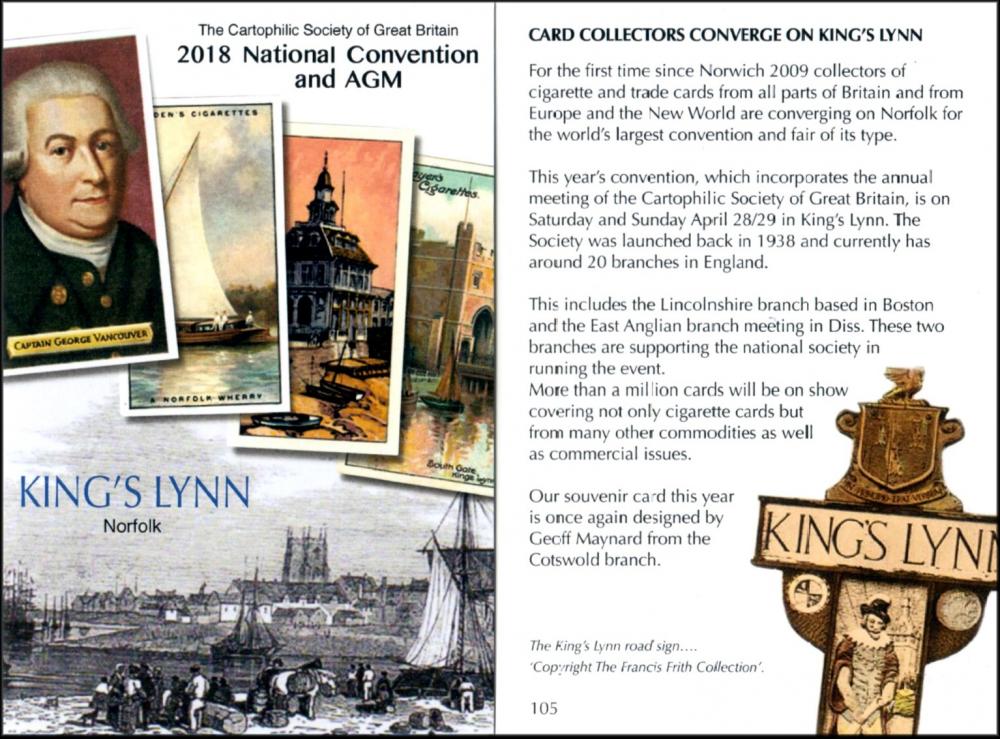 We could not believe it was ten years ago that we were down this way, though then we were visiting Norwich. This year, after searching the breadth of East Anglia, we had found “Lynnsport” a leisure complex run by Alive Leisure, with the usual easy level access for all visitors, catering facilities and car parks, plus great transport links. This year is that the local branches had agreed to provide free valuations to the general public and advice on any cards that their family collected in the past, or that were found in attics etc. And we can say branches, because this year two were co-hosting; The East Anglian Cigarette Card Club, based at Diss, and The Lincolnshire Branch based in Boston. The Cartophilic Cup was won by our postal auction secretary, Mr. Corner, for an entertaining article about how he started collecting. He took the opportunity to thank all of the members who had voted for him, saying he was thrilled, flattered and honoured, not to mention totally surprised to have won. The Council did extremely well to keep this to themselves, I had absolutely no idea. I promised, rashly, that when I could find the time I would attempt another article, but asked Mr. Editor not to hold his breath! Next year`s date and venue were announced, Saturday 27th and Sunday 28th of April, at Studio 7, the former television studio now within the Kings Meadow Campus of Nottingham University. No live auction at the Convention, but the lots were laid out and made available for viewing on both days – on Saturday between 2:30 and 3:30, and on Sunday between 12 and 1 – with bidding sheets freely available. However the auction itself would not close until Friday May the 4th. We urged all collectors to please come in and view, many of our cards, especially in the Convention Auction being scarce and seldom appearing in those general online auctions which seemed to be gaining such a foothold. The star of this auction was lot 45, a Macdonald Cricketer, it was lot 45. I have never seen one of these before, and judging by the catalogue value, obviously very rare. Other highlights included Wills Cricketers 1901 and various Barratt Cricketers, a set of Colinville Football Internationals, seven Boys Magazine Famous Footer Clubs offered as individual lots, Taddy Prominent Footballers with London Mixture backs, Clarkes Sporting Terms, Barratt Cowboy Subjects, and a section of rare early Ogden’s cards.