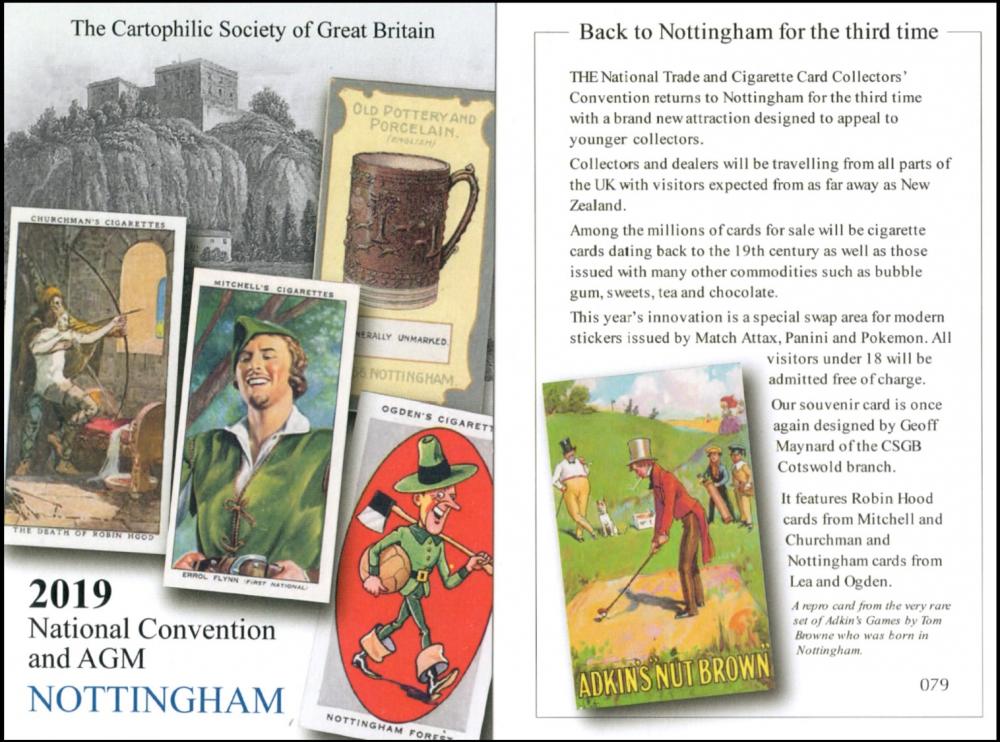 All change by the time of the AGM, we had gone back to our old practise of holding the convention on Fridays and Saturdays, though it was not of our choosing, we had been unable to book the venue for the Sunday. We were also not at Studio 7, the former television studio now within the Kings Meadow Campus of Nottingham University, as the owners were concerned there could be insufficient parking facilities. Instead our Cartophilic TARDIS was suddenly re-routed, and we were at the De Vere Jubilee Conference Centre, in Orston Drive instead. While just a mile separated the two, the change created quite a few sudden changes to our plans, and, interestingly, especially for ephemera collectors, this venue change was made after we had started issued advertising materials, so look out for these items, they may well be THE Cartophilic Collectable of the future. They have already been featured on the internet, check out:

We had forty-four tables, all booked up very quickly, the wall tables as usual were snapped up particularly fast, the extra hanging space you know, and all the leading card dealers were in residence, along with many smaller local dealers, even a few members taking a one off stall in order to reduce their duplicates box and make some money to spend on more cards. If you would like a table for one or both days at any future fair, we can usually accommodate, but you must enquire well in advance; our only criterion is that you must be a current member of our society at the date of the Convention.

Attendance was high, and business reportedly very brisk. In fact several dealers will tell us later that they had found it one of the best events of recent years. Perhaps this has something to do with our new “swap area”, where anyone could bring in selected modern cards they had already and swap them for others they needed. A bit like a bring and buy sale, but better. We started with Pokémon and Panini/Match Attax 2018/19 season cards. The scheme was mainly to attract new younger collectors, but we found a range of ages were interested, and we saw steady swapping all day.

We also arranged to give free advice and valuations to anyone bringing in cards that they had inherited or acquired. By the way, many thanks to Nottingham Branch for sponsoring this event, the third time they have co-hosted our annual convention - here is a link to their website.

As well as a chance to visit the dealers, we also had the lots from our postal auction available for viewing on both days; on Friday between half past 2 and half past 3, on Saturday from 12 until 1 pm. We asked that our frequent and infrequent bidders should take advantage of attending the viewing, as this auction is always the best in terms of quality and scarcity with some very high value sets and types, so always well worth a look.

This year`s highlights were a type card by J B Johnson from “National Flags & Flower Girls”, sets of Smith Famous Explorers and Battlefields of Great Britain, Churchman Footballers (Coloured), Players Old England’s Defenders and Mackenzie Actors and Actresses, also known, I believe, as Music Hall Artistes. There were three Wills Boer War Medallions, some more Ogden’s early types, ten Smith A tour Around the World (Script back) and five Rutter Flags and Arms of Countries.