This will be added to on a regular basis from now on, and please do send your memories and additions as well. It is not quite ready, but neither were the men who were called up. And it just seems fitting that we start it on Remembrance Day (2021).

In the months leading to the outbreak of war, many Cameric Cigarette Card Club Branches had been announced, but I have come to think that this was a way to keep card collecting going in local areas, away from London. The club had also introduced Approval Rounds, where cards were sent out for viewing, and also started to publish “Notes and News”, a rather grandiose title for duplicated sheets of paper that were mailed out to members every few months giving updates, but again  lessening the need to travel to a London meeting to hear what was going on.

The first three Branches were announced in April 1939 in The London Cigarette Card Company`s "Cigarette Card News” magazine (Vol. 6, No.67, p147) , these were Ayr, Manchester, and Charlton (S.E.) - which was on the outskirts of South London. Manchester Branch did not start immediately, waiting until June 1939; however, they only managed four or five monthly meetings before they were disrupted by the War, when Branch Secretary and founder Mr. A. J. Woolley was called up, and sent to the Royal Navy. Owing to that it was decided that the Branch would close temporarily, and resume after the war had ended.

Cigarette Card News (Vol 6, No.72 September 1939) saw its front page proclaiming “A State of Emergency”. Though it admitted that “At the moment of writing, while matters look most grave, We are not at war. Before this number is in our readers` hands, however, the issue will have been decided. We hope it will be peace, and we imagine that 99 per cent of our readers share that hope – but it is idle to pretend that the chances of the worst happening have not been immeasurably increased by the happenings of the last few days.”
At that time the Cartophilic Society was sharing the same magazine, but never mentioned any stirrings of impending war at all. In fact it gave a Council meeting date of [Thursday] 14 September, 1939, at 6.30 p.m, followed by an Ordinary meeting an hour later.
That date is actually notable for another reason because on that day regulated games of football were suspended by order of the government.

On March 16 1940, at the first Annual General Meeting of the Cartophilic Society, it was announced that “Your Council were faced with the probability that meetings would be difficult, and decided (very rightly, I think) to increase THE BULLETIN and to reduce the number of meetings … Transport is difficult, and may become more so; times for meetings are difficult; and practically all of us are being, or will be, called on to perform duties whch may make it impossible to attend regular meetings.”

In April 1940 Vol.1, No.IX, reported that Alfred Woodiwiss, a cigarette card dealer based in Chiswick, and a member of a Territorial Unit, had been called up prior to the war being declared. As a result of this he had arranged that his business be taken over by fellow dealers Messrs. R. H. Martin of 1, Orchard House London S.E.16, who offered monthly mailing lists as well as two specialised listings of “Scarce Sets” and “Modern Sets”. For all these, Cartophilic Society members were given 12½% off the quoted prices.

By the time that May`s magazine (Vol. 1, No.X) was issued, other dealers were being affected. Richard Denny of 94, Beamsley Road, Frizinghall, Bradford reported that “owing to rising costs, paper shortage, and general difficulties created by war conditions, it is no longer practicable to issue my list weekly.”

July`s magazine (Vol 1, No.XII) tells us that on the 15 of July, 1940, the Council “met to deal with routine business and discuss matters arising out of the present state of emergency” and that “It was decided to form a Committee with powers to act on the Society`s behalf in an emergency”, this consisted of Eric Gurd (Vice President), Mr. Lewis (Chairman), Mr. A.C. Wiggins (Secretary), Mr. Alan Mabey (Treasurer) and Rev. Stanley Pearce, plus Messrs W.M. Wright and W.K. Keeves. (surely a typo?)

By the time of the August magazine (Vol.1, No.XIII) Mr. A.B.C.K. Keeves had joined His Majesty`s Forces, so a vacancy existed on the Emergency Sub-Committee. On a show of hands Mr, R.F.R. Barrow was elected. They had also forgotten to mention, of course, that Mr Glidden-Osborne, the Society President, was still presiding over that sub-committee in an ex-officio position. In the same magazine The London Cigarette Card Company announced a summer sale, starting on the 29 August, and made a generous gesture, offering to supply annual subscriptions of “Cigarette Card News” at half price (2/6d.) to members of the fighting forces.

In September 1940 (Vol.1, No.XIV) an announcement right at the very back of the magazine

I have not been able to track this down yet. But will keep trying! But September 1940, only a few weeks after the Battle of Britain, things changed, and instead of factories and airfields, towns and cities became targets for nightly bombing raids. September 7, 1940, is usually regarded as the start of what would come to be called "The Blitz", a shortened form of blitzkrieg, which was German for "lightning war".

The next month, closer to home: 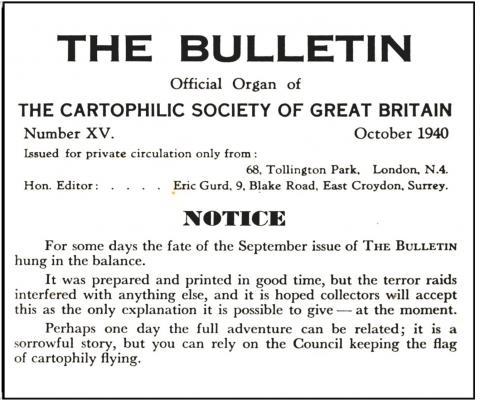 Our latest section, telling the story of cartophily, and cartophilists, during the Second World War.