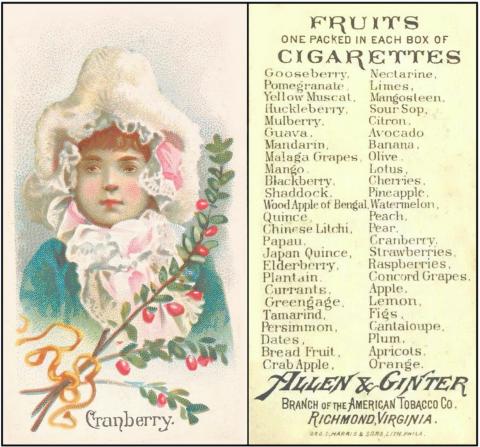 This is a cranberry, which provides accompaniment to most Thanksgiving feasts. Many people believe that whilst the settlers brought the meat, the Native Americans brought the cranberry, which to them was only partially used for food, being also important in medicine and dyeing of clothes. However the cosy idea of the settlers and the Native Americans sitting down and sharing their meal is almost certainly not what happened. But for those who follow that thought, the cranberry soon became a useful addition to the settlers meals, providing a burst of colour to what was pretty brown fare.

I have to say I really like this set, even though I think it may have been better called “Fruits with Children”. It is charming and humorous. It was also a set which could be found in the collection of Jefferson Burdick, and I am sure it amused him greatly. In fact you can see his very own cards in the Metropolitan Museum's collections (if I have done it right, the first fifty items shown will be every card of this set - if I have done it wrong please let me know and I will try again). As to the one I like best, it just has to be the crab apple; then the lemon, and the canine on the cantaloupe; but every card is a miniature masterpiece.

These cards are actually backlisted, which means all the card titles are shown on the back of each card. Sometimes you can find them with the cards ticked or crossed through, which does actually mean they fulfilled their intended purpose. I always find these markings very exciting, for they link me to a collector who I will never know, but who, just like me, diligently searched for cards to complete their set, marking them off one at a time, in different pens, or pencils. What I most like is the way that these little scratchings, almost carelessly done, are a window into the life of someone who may as well have lived in another galaxy, but somehow has come through the swirling mist as a visitor from the past, to connect with me.