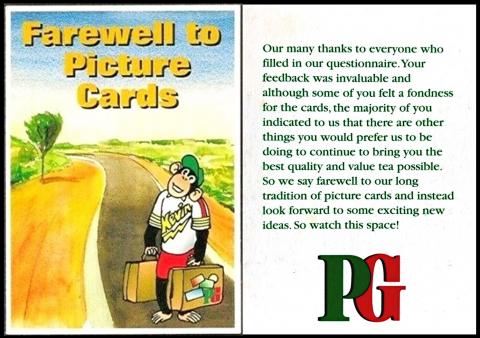 We close our week of tea with the last ever Brooke Bond card, which poignantly shows a cartoon chimp and the heading “Farewell to Picture Cards”. This sad end came after the general public were asked to fill in a questionnaire card which was inserted in the tea, saying that PG Tips need your help and offering 100 cuddly chimp toys to be won.

Once the closing date had gone (31 July 1999) along came this card which said that though “some of you felt a fondness for the cards, the majority of you indicated to us that there are other things you would prefer us to be doing to continue to bring you the best quality and value tea possible.” So that was it.

Actually there were three different cards like this one, all have the same chimp, but the first shows him on a plain white background, ours has the road, the cactus, and the birds (vultures?), and the third is a much wider road.