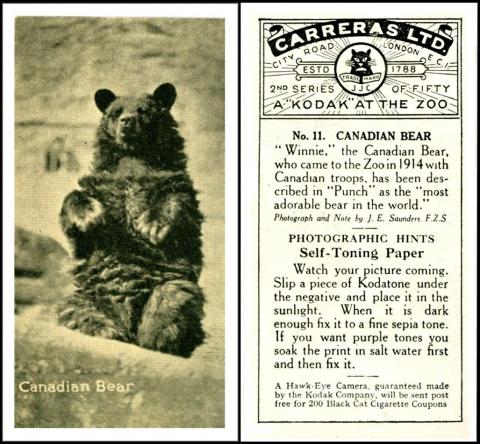 this set is very unusual to look at for instead of black and white it is printed in black and cream. If you can`t find the set listed in a reference book or catalogue, look after "Kings and Queens of England" as for some reason the "A" which starts the set title is often ignored.

The first "Series of Fifty" was issued in September 1924, and our second series in January 1925. Both series were listed in the 1950 London Cigarette Card Company catalogue at 9d a card and 50/- a set each.

I am not sure how Kodak became involved with the set at all, because it could have easily been titled “A Camera at the Zoo”. There is a bit of a link because half of the card is taken up with photographic hints and at the very bottom it says that "A Hawk-Eye Camera, guaranteed made by the Kodak Company, will be sent post free for 200 Black Cat Cigarette Coupons".

But I will continue to research, and would be interested to hear from anyone who knows. If the set was later it would have appeared somewhere in a card magazine, but this date is too early for even “Cigarette Card News”, which was only founded in 1933. Another source of information would have been our proposed reference book on Carreras and Boguslavsky cards. This was listed in 1948 as "to be issued" - on the inner back cover of our RB.9 on Lambert & Butler, and it was in the "Proposed 1949 Programme" on the reverse of RB.12 (Godfrey Phillips) and RB.13 (Taddy) but then it disappeared and only surfaced as part of the World Tobacco Issues Index issued in 1956.

This is the most amazing card, for this is “Winnie” and she is cited as being the inspiration for Pooh. She was a black bear that was acquired as an orphaned cub by a soldier,and she travelled with him, all the way to London, where she was temporarily left at London Zoo for the duration of the First World War. After the War, the soldier came back, but she was too settled to move to a zoo that he had arranged for her, closer to him, so he let her stay, and missed her forever. She became known as Winnipeg and she lived until 1934. Apparently Christopher Robin enjoyed trips to the zoo, and she was one of his favourite animals to stop and gaze at. And that is why he called his bear Winnie.

If you only look at the fronts of your cards, you may never have known this, because the front simply says "Canadian Bear". It is only on the reverse that the magic is revealed, when it says "Winnie", the Canadian Bear, who came to the zoo in 1914 with CanadianTroops, has been described by "Punch"  as the "most adorable bear in the world". This text was by J.E. Saunders, a fellow of the Zoological Society, who wrote all the notes for the reverses. However, this brings something else up, for A.A. Milne was assistant editor of "Punch". So is there anyone out there who can find that article in "Punch" and see if it was not the first appearance of "Winnie" by A.A. Milne....?