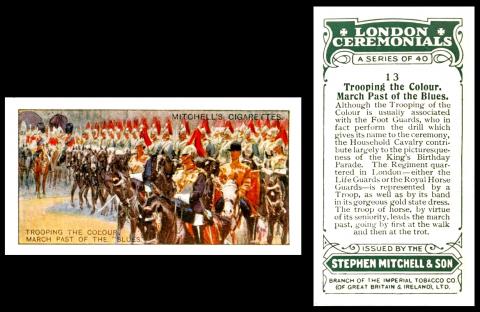 Another form of “blues” can be seen here at the Trooping of the Colour. In 1928, of course, we had a King, George V, so this card shows the King`s Birthday Parade.

The surprising thing about this set is that it is only of forty cards. I am sure given some thought they could have found just ten more, especially, given the issuer, events of a more Scottish nature and symbolism. If I think of any I will add them.

The Trooping of the Colour has taken place on the official birthday of the King or Queen for British Sovereign since 1748, but the event is even earlier, and was first performed for King Charles II.

What happens is that every year, a selected Regiment carries its colours, or flag, before the Sovereign, in a kind of blessing, to bring them luck, and to display them so that everyone could know what they looked like in case of need, but also to remember those who fought under them and were forever lost.

These days the colours have less significance, but they were originally the one thing you could rely on to look for on the battlefield to know whether you were on the right side of the line and how many, if any, of your Regiment still survived.