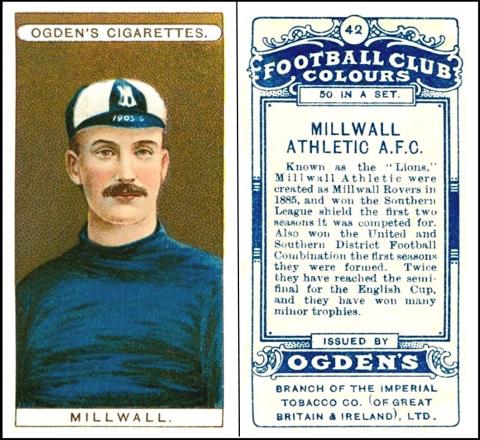 All the cards were printed by Mardon, Son and Hall.

The Churchman version was definitely the easiest to acquire, and it was the first to be illustrated in Cigarette Card News, Volume 1, issue 6. I will get that scanned and added some time.

Millwall, of course, was in London’s Docklands, and docks are the most important part of the seafarers journey, from which they sail out, and to which they hopefully return home. Here their cargo is unloaded and they can explore the feeling of the solid earth on their feet. At one time the Docklands was bustling and thriving, and full of comradeship, a word so fitting of its Naval origins; today this has all gone, it has been changed in use and character, and is housing for the most part, though the scars will always be there for the knowing to trace along its skin.

According to the Cartophilic Information Exchange the footballer shown is General William Stevenson. He was born on New Years Day in 1875, in Padiham, Lancashire and died on New Years Eve 1961. You can read more about him on the Play Up Liverpool website