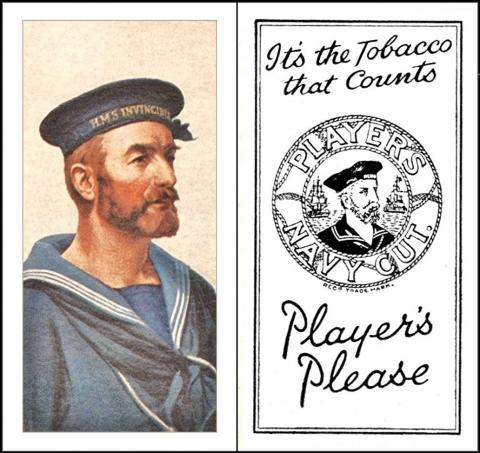 Here we have a single card that was inserted into packets as an advertisement. Our card was actually illustrated in the original John Player reference book RB.17, issued in 1950, so we will add that when we get to a scanner!

It is a set of one, but it is also available in a larger size, which would have been in the larger packets, so I guess type collectors can decide for themselves if they call it a set of one or a set of two. I don’t have the larger size, if anyone does it might be fun to add it and allow your fellow collectors to visually compare the two.

In the London Cigarette Card Catalogue of 1950 both were available, and they retailed at 1/6d for the standard size and 5/- for the large.

If you look closely at the hat band it reads H.M.S. Invincible, which is a change from the original Player’s Sailor, for his hat band said H.M.S. Hero, though in fact if you look really closely the life belted head on the reverse of this card still says H.M.S. Hero. Wikipedia/Hero tells of eight ships called H.M.S. Hero but none of them were sailing at the time of this card’s issue. However there was no H.M.S. Invincible in 1929 either, so if anyone knows what is going on, please pass us the info.

Even curiouser there is a set of John Player playing cards issued around the same time which also has the same dual band situation, the sailor on the back of each card having H.M.S. Invincible on his hat band, and the head on the ace having H.M.S. Hero.