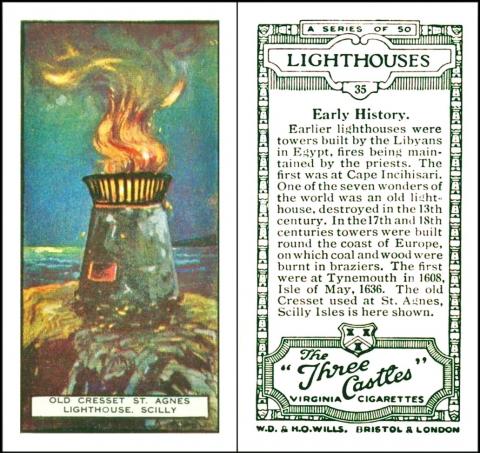 The lighthouse is truly the seafarers friend, not only a light to illuminate their path, but a beacon shining in the darkness, and a refuge if the calmness of the sea allows for rowing boats after all else is lost.

This entire set is devoted to these majestic structures but Old Cresset St. Agnes is rather a favourite, for it shows that even when we had no electricity we still found a way to make darkness into light. Mind you for some reason, although it deals with the earliest history of these structures it is card 35, over halfway through. The lighthouse mentioned as being the first (yes I have given up trying to get those letters in the right order!) was actually at Sigeum near Troy, and the “..old lighthouse..” which was one of the seven wonders of the world was of course The Pharos of Alexandria.

The Wills archives tell us is that this set was issued in July 1926 with Three Castles brand in New Zealand. It was also issued anonymously as a general overseas issue by British American Tobacco in the same month and year. In our original Wills Reference Book the two sets were included together, hence the A suffix, there being a B for the anonymous, but for the World Tobacco Issues Indexes they were split away as two separate sets, the anonymous was moved to the Z section. In 1956 this was coded as ZB6-43 and for the most up to date version it has become ZB07-460.