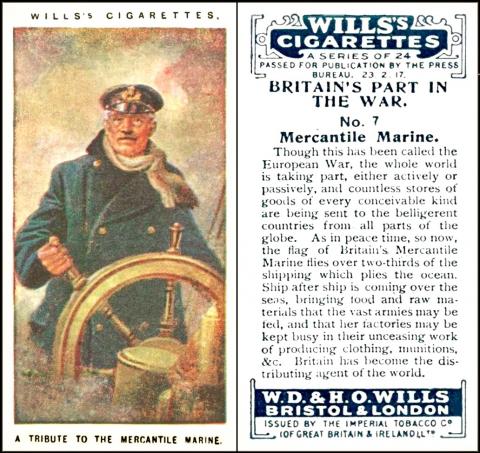 If you look in the header box on his card you will see that these were “Passed for Publication by the Press Bureau 23.2.17”, a kind of censorship test to ensure that no information on the cards could be useful to the other side.

The set was not issued for export, and perhaps that is why, though it does include cards of other Allied Nations, the ANZACs for one, and it would have been good for them to be allowed to see their work, and sacrifice, was appreciated if only by being included in this set.

This card is about the Mercantile Marine, and the text seems to be an attempt to prove that whatever the U-Boats did, we could take it, for “…ship after ship is coming over the sea, bringing food and raw materials that the vast armies may be fed, and that her factories may be kept busy in their unceasing work of producing clothing, munitions, &c”.

In truth the Merchant Navy faced a deadly foe, and many sailors were lost, so much so that they had a special medal at the end of the First World War, called the Mercantile Marine War Medal, first awarded in 1919 for “one or more voyages” or “at least six months service”. It is estimated that during the actual War, (not including the aftermath, when mines were still bobbing about across the seaways) 3,000 vessels were lost, and over 18,000 men, all of whom were simply sailors, not military ones, and not even part of the Royal Navy. In fact many men were not known, because civilians employed on seafaring vessels did not even get on the register until War broke out, and the records that were so hastily made then were all lost.

By the way, in case you were wondering about this strange term “Mercantile Marine”, yes, it is the Merchant Navy, but it was not called so until 1928, and only then by a strange default, when the Prince of Wales, the future Edward VIII, was granted the title of Master of the Merchant Navy and Fishing Fleet.