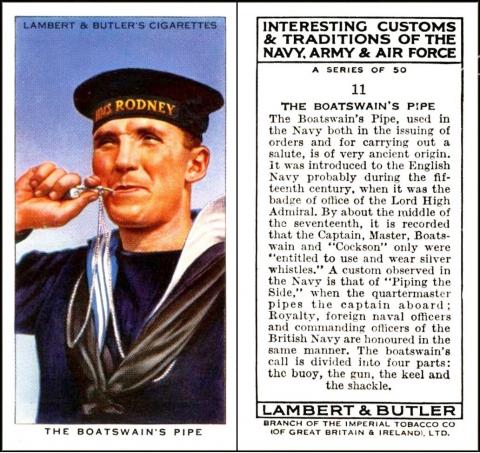 This card shows something known to, and remembered fondly by all sailors, the boatswain`s pipe, the call of which gives orders, welcomes sailors aboard, and makes it known when higher ranks are arriving.

They are quite collectable now, and were often silver; however, just like cards, there are modern reproductions.

This cap tally is for HMS Rodney, sister ship of HMS Nelson, who entered service with the Royal Navy in 1925 or 1928, saw service in the Second World War in Norway, the Mediterranean, including the Normandy landings and the Atlantic.

Her general claim to fame was that she was present at the sinking of the Bismarck in 1941. But she was also featured on a series of 48 photographic cigarette cards called "The Navy" which was issued in 1937 by Pattrieouex, and on Gallaher`s coloured set "The Navy" Some of these cards are actually the same, look at just one "Spit and Polish", which is a close up on card 20 of the Gallaher coloured set and just the left hand man off card 43 of the Pattrieouex photographic set.

Despite these, she was scrapped in 1948. The reason given was that she had been overused and not maintained, and she was now in too poor a condition to refit and save. The suggestion of a dry dock and museum was apparently not suggested.