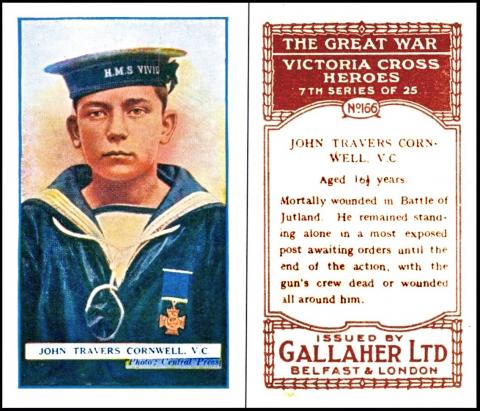 This young man is Boy, 1st Class, John Travers Cornwell, aged 16½, but looking much younger. He was a boy scout, and joined the Navy at the age of 15, without telling his family, his references coming from his headmaster and from a man for whom he was working as a delivery boy.

The card says he was “mortally wounded in Battle of Jutland”, this was on the 31st of  May 1916, when his ship was attacked by several German Cruisers. At the time he was working on the deck with one of the guns, doing the job of making sure the gun sights were true and the range was accurate. He did this by turning tiny wheels when ordered to by the men in command, just one of the jobs that the “boys” with small fingers were so much better at. His gun received several direct hits and was just a gun, no armour surrounding it, so all the men were immediately downed. John Travers Cornwell was also wounded but propped himself up for fifteen minutes in the hope that a new crew arrived.

He died the next day, before his mother could reach the hospital.

And this is just one of the stories from these cards.

Considering the Victoria Cross was only awarded as a great honour, it is chastening to think that eight series of twenty five cards were able to be issued in 1915-1916 alone. two hundred souls whose bravery was such that it needed to be recorded with the V.C., and, like John Travers Cornwell, most of them were not alive to receive it.

Curiously, the first series of this set was also issued by B. and J.B. Machado, in Kingston, Jamaica (M075-140 : M14-2), which was a company allied to British American Tobacco. They only issued those first twenty five cards, in 1916, and it is not known why they did, or why they stopped.

There is a really well researched piece about Machado online at flickr as part of the National Library of Jamaica.