This is the beginnings of a celebration of Christmasses past, as seen through the pages of Cartophilic magazines. All readers are welcome, and indeed encouraged, to add any they find by emailing a scan or typed copy to us HERE. 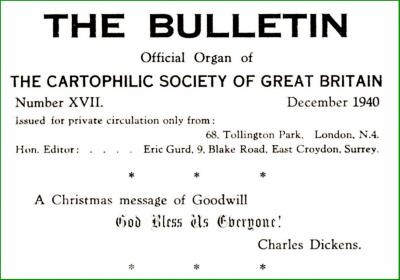 The first acknowledgement of the festive season comes on the front page of "The Bulletin", number XVII, December 1940, and here it is.

The editor, and presumably provider of the sentiment, was Eric Gurd, though I know not that he had any connection to Charles Dickens.

But they are certainly brave and inspiring words with which to close yet another year in wartime. This was the only salutation I have found in the entire run of "The Bulletin", but I do lack the first seven copies, including December 1939. Perhaps there was something there? 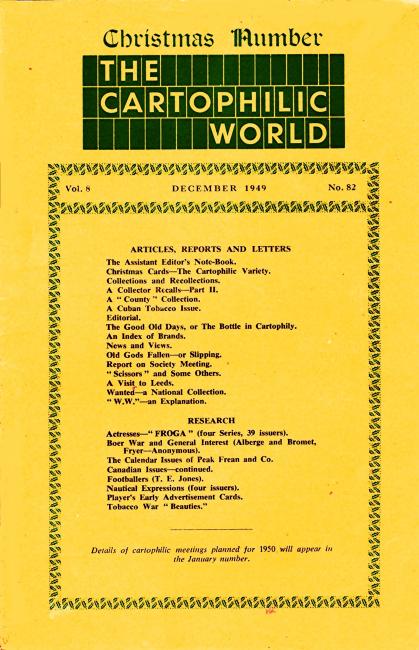 When "The Bulletin" changes into "The Cartophilic World" several years pass without any record that a Christmas exists.

Then, in Volume 8, the December edition, No.82, suddenly acquires a new yellow coat, of very slightly thicker material, and at the top, in thick, Olde English type, it proclaims itself the "Christmas Number".

It also gains framelines, or, more correctly, pictorial borders, for they consist of small squares, each being a tiny trio of holly leaves, making a border to the section with the volume, date and number, and to the main table of contents, which, thrillingly, includes what I believe to be our first specially written, Christmas related article, which was entitled "Christmas Cards - The Cartophilic Variety"

Perhaps this festive fancy was a delight of the new editor, who was Edward Wharton-Tigar. 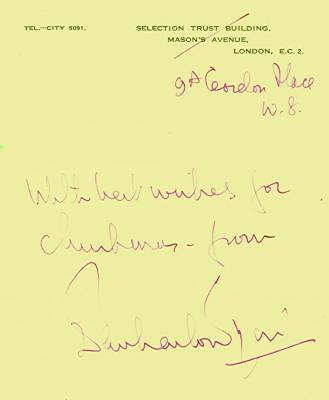 Before I reach that article though, there is an additional delight in my copy, as it contains this hand written letter from none other than Edward Wharton-Tigar, still using his Selection Trust addressed paper, but crossing that through and writing his Camden Place address below.

It simply says "With best wishes for Christmas - from" and is signed below.

Sadly I do not know who was the lucky recipient of the magazine as a Christmas present in 1949.

I would like to say though that if you are a seller on eBay, or anywhere else, when buyers ask of where their buys have come, they are seldom interested to find out how much profit you made, they simply wish the story of the item to continue. So if they belonged to a relative, please do tell us, and his name, and perhaps even something of his life, may be remembered forever, handed on as we ourselves must also fade away.

The Editorial, by Edward Wharton-Tigar and his assistant Mr. W. J. Wicks, begins with a suitably festive flavour, for it says: "With this slightly enlarged edition, we wish all our readers the compliments of the season."

And now we reach page 802, and that first Christmas related article, which you now have the pleasure of reading again, seventy-two years on. 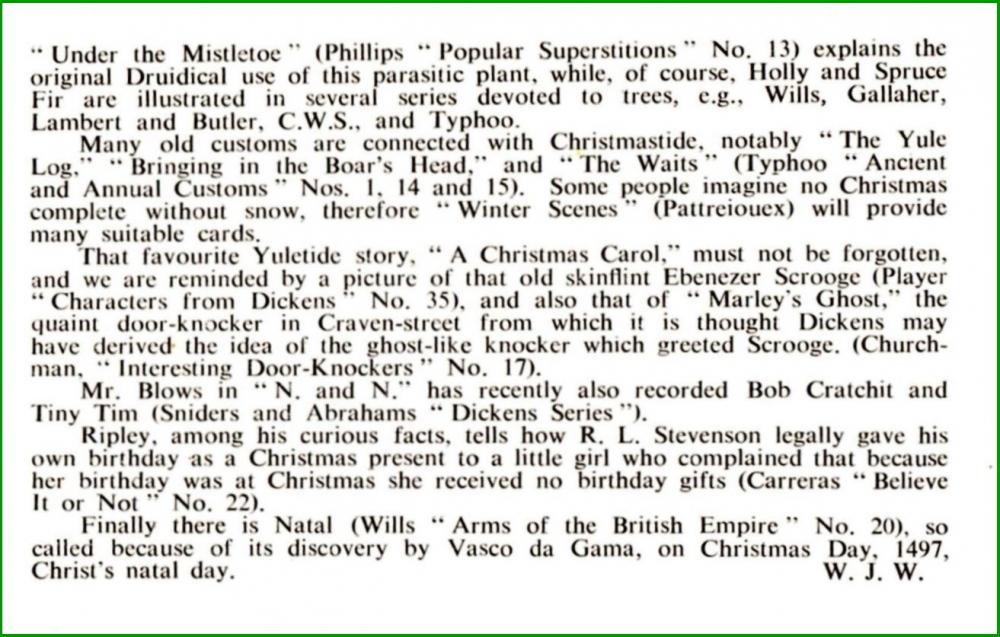 As to why it is in two parts, it started at the foot of one page and slid onto the top of the other. And the author, W.J.W. was none other than our Assistant Editor, Mr. W. J. Wicks. Some of these cards have been featured in our newsletters, and some are entirely new to me, but it is my intention to find them all, and to illustrate them here.

Sadly after the exciting specially designed and differently coloured cover of the 1949 Christmas edition, the November-December 1950 edition (Volume 8, No.90) is the same as all the other magazines in that year. And it goes straight to the point with the first sentence ... "We should have liked to have made this a specially large Christmas number, but our funds simply will not allow this, and a journal of twenty pages, excluding covers, is the maximum that we can at present afford." 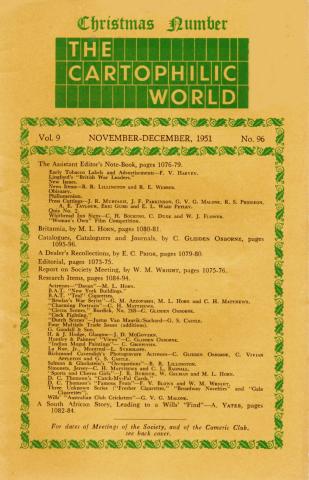 However by the following Christmas things had moved forward, and Volume 9, No.96, November-December 1951, saw the return of a yellowy coloured cover, complete with similar holly framelines, though the holly leaves had grown a bit in size in the last two years.

Whilst there is no mention of any Christmas related article on the cover, and none inside, the editorial begins with good news: "This year we are able, as in 1949, to publish a slightly enlarged Christmas number, and we take the opportunity of wishing all our readers the compliments of the season."

In 1952 the cover of the November-December magazine (Volume 10, No.102) looked much the same as this, but it was on a white page, which is much easier to read.The editorial started by saying that : "Once again we present a 28 page Christmas number, and we wish all our readers a Happy Christmas and the best of luck in 1953." Again, apart from this, not a word of festive content. 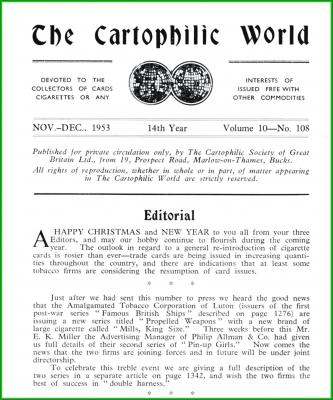 A similar cover design, but with smaller holly, appeared on the November-December 1953 (Volume 10, No.108).

By the way, the three editors referred to were Edward Wharton-Tigar, and Commander A.M. Rundle, who were Hon. joint editors, and W.J. Wicks who was Hon. Assistant Editor"].

The following year, (November-December 1954 - Volume 10, No.114) saw no white cover, just the standard thickness and colour, with what was becoming the usual design. However there was a bit of a hidden treat in the table of contents... The editorial begins "Once again we have made the full circle and it is my pleasure to wish you all a Merry Christmas and a Happy New Year from your three editors." Sadly they had to report that "No new cigarette card issues have appeared in this country." However, the number of trade cards was definitely increasing, principally by confectioners, there were rumours of a new series from the Amalgamated Tobacco Corporation of "Kings and Queens", and they were eagerly awaiting part two of the London Cigarette Card Company's Catalogue and Handbook, covering the issues from 1920 to 1940. Progress was also sure and steady on the "World Tobacco Issues Index". The hidden treat was that Mr. I. O. Evans had penned us a "Cartophilic Christmas Carol". See you tomorrow, with more festive fare.

And so closes the third door of our Christmas Countdown.