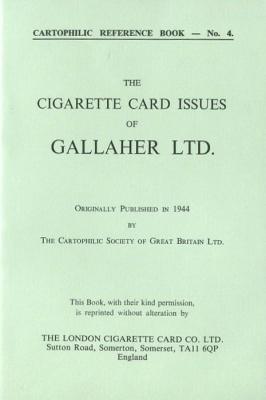 "Cartophilic Reference Book - No.4 : The Cigarette Card Issues of Gallaher Ltd. An Official Checklist Compiled by A Committee of the Cartophilic Society of Great Britain" did not immediately follow on from our Wills booklet, and only appeared in 1944. Like the previous three, this book was issued as a limited edition of 400 copies, and there are no illustrations.

It was once more "Printed in Great Britain by Parker Brothers, St. Albans, Herts. " and produced with a slightly thicker green cover, shown right. This booklet returned to the same format as the original two, having, on the inside cover, the quote from Thackeray "Here is the best I can do . . . I stand by this book, and am willing to leave it where I go, as my card.", followed by an Editor's Introduction telling a brief version of the story of Tom Gallaher and his tobacco company. It closes with the date [February, 1944] and Editor's initials, E.G. [Eric Gurd]

For the first time, the inside of the back cover carried other than the printer's details. This was a list of Cartophilic Reference Books so far printed, which by now had been covered by the general term of "The Cigarette Card Collector's Encyclopaedia". The list covers the first seven volumes, which may appear confusing, but it was simply because this Gallaher book was issued out of order - and by the time it was issued, books 5 and 6 had already appeared.

It was an immediate success, and was out of print by 1950. Many years passed until a new reprint was produced; the decision was made to redo the cover into a plainer green format, but all the interior text remains the same.