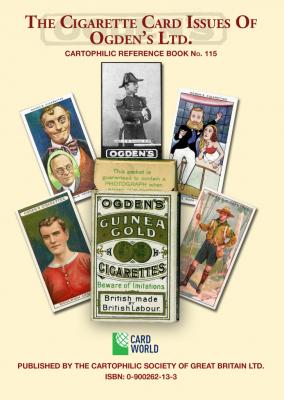 (115) The Cigarette Card Issues of Ogden’s Ltd.’ is a softcover edition of reference book 115 and includes additions to the very complex card issues made by Ogden’s. This very popular volume is a reprint of the now out of print hardcover edition that was printed over 10 years ago and includes the updates that have been made since. The format of this work remains pretty faithful to that originally adopted in the 1949 and 1959 editions. In the first section, listing Ogden’s non-Guinea Gold issues, the same numbering has been retained even though a couple of series titles have been renamed. In the Guinea Gold section the listing utilises the same basic set numbers that appear in the New World Tobacco Issues Index. Another sensible amendment is that the numbering of the illustrations matches the actual set numbers.

In terms of statistics this new softcover volume consists of 330 pages of information! Not all of this represents additional cards or information, as much of the excess is taken up with a more generous space allocation both within and between the various set listings. Nevertheless, the number of new items and subjects that have been included in this book is impressive. There is also an interesting third section that details miscellaneous items such as albums, postcards, playing cards and premium issues. With the different bases and variations to portraits and captions, some 20,000 different cards might be collected. In terms of what might be called the “basic sets” the summary states that a total of 8,532 small and 1,073 large cards are listed in this volume. Unfortunately, the numbers in the summary have been printed out of alignment and do not actually add up. Nevertheless, the total is formidable and it has taken a remarkable, almost super-human effort, on the part of the original compilers and the current Research team to check and list such a multitude of cards. Inevitably in such a complex and lengthy work there will be the odd glitch or error. I am sure the compilers would welcome notification of any errors or additions so that the vital work of researching and recording may go on.

I very much like the fact that the original acknowledgements have been reprinted in full. How much we owe to the initial pioneers can never be adequately quantified but I am sure their reward is that we still make use of, and appreciate, the outcome of their untiring efforts. The current Research team has also laboured mightily and productively without any reward other than the satisfaction of a job well done. Roy Honeywood had the onerous task of putting the original work onto a computer file and several other members have made important contributions. On your behalf I thank them all. The man who has pulled it all together and has invested in this magnificent reference work huge quantities of his own effort, knowledge and experience, is the Research Committee Chairman, Martin Murray. Of course, the best way of thanking the Researchers is to purchase the book. It is available now on the website…

There are two completely different sets of the Guinea Golds numbered from 1-200?
A group of ladies went to Calcutta in the 19th Century to play cricket and football?
That silks were issued in Ogden’s cigarette packets in Canada?
That there are probably 110 different ‘Modern War Weapons’?
Ogden’s issued ‘Sweet Caporal Cigarettes’?
There are two varieties in the set of shaped ‘Football Club Colour Badges’?

These facts and many more are revealed in RB115!!!