A surprise purchase in Hong Kong

As some of you might know, I have been absent from the UK branch circuit for the last 24 years whilst working as a contract finance manager for a construction company in the middle and far east until 2017 when I finally retired.

Although I was unable to attend any SCSGB branch meetings, I was still able to pick up a quantity of Chinese cigarettes cards and advertisement posters when I was working on the construction of Hong Kong Airport in the mid 1990’s. After searching the backstreets of Hong Kong I managed to find a collectors paradise in a four storey building in Portland Street in Kowloon’s Mon Kok district. This building primarily sold stamps, coins, banknotes, phone cards and in one particular shop – cigarette cards. 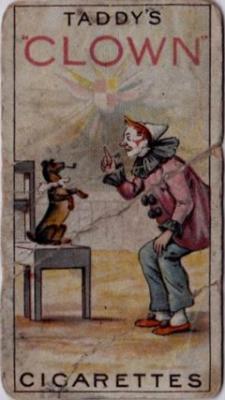 My Mr. Wong had an ingenious way of picking up hard to find cards, he employed a man on a motor bike to visit out of the way villages in Northern China to buy anything collectable. He would then meet up with Mr. Wong every six months and sell what he had collected. I kept a record of what I bought and recently came across a record of what I bought in January 1995. Included in a bulk purchase of 1,200 cards which were found in the Tientsin district of China were type cards from Egyptian Cigarette Manufacturers (Russo Japanese War), Osaka (Birds & Animals) and Kimura (Warships).

The most surprising thing of all was a very grubby Taddy Clowns and Circuses card (see image). I cannot for the life of me imagine how a card from an unissued set, from a company which closed down nearly a hundred years ago, could turn up in a village in Northern China. I attach a scan of the card in question – it is a pity it is in such poor condition but what can you expect for a purchase costing five Hong Kong Dollars (about 45 UK Pence!!).