Today saw the birthday of the first truly internationally famous Chinese-American film star, Wong Liu-Tsong. You may not immediately recognise her name, for she used another, namely Anna May Wong. We are privileged to have two collectors amongst us who are very knowledgeable about her life and her cards, and have sent us her story.

According to Carreras Ltd “Famous Film Stars” card number 1, front image courtesy of Paramount, she was “Born in California, of Chinese parents … her real name is Wong Liu-Tsong . . . she has black hair, brown eyes, and is 5 ft 4 ins tall” Rothmans “Beauties of the Cinema”, one of the few circular shaped sets ever issued, (though it is also available as a standard shaped set) adds “Born in Los Angeles` Chinatown.” Godfrey Phillips “Film Stars” 21/50 tells us that “Wong Lui Tsong . . . is Chinese for “Frosted Yellow Willow”. Whilst Godfrey Phillips “Film Favourites”says “Frosted Yellow Willows” in the plural, and also adds “her hair is jet black and her eyes are lustrous dark brown”.

One of the most complete card biographies of her appears on John Sinclair`s “Film Stars A Series of 54 Real Photos” 1/54 which even gives her actual date of birth, saying “Was born in Los Angeles on January 3rd 1907(actually it was 1905) and her real name is Wong Lui Tsong. Height 5 ft 4 ½ in. Has black hair and blue eyes.” I suppose nobody can get everything right! And Gallaher “Portraits of Famous Stars” 8/48 says “Born in California on January 3rd 1907 (again) this exotic Oriental has never been East, neither can she speak Chinese, but is equally at ease speaking English, French and German. Her name in English is supposed to mean “frosted yellow willow”. No card found so far says that she was actually the second of seven children.

She first appeared in a film in 1919, “The Red Lantern”, starring Alla Nazimova, as an extra who carried one of the lanterns. The Carreras card may be thinking of this when it says “She began as an extra in silent films”, or maybe of her second film “Outside the Law” (1920), with Lon Chaney, in which appeared two of her sisters, Bessie (who had already appeared in “Broken Blossoms” in 1919) and Lew Ying (Lulu) her eldest sister (who would not make another film until 1940). In fact you can see Lulu on a postcard by Ross Verlag, it is card 6006/1.

The Rothmans card says “At 14 was much in demand for small Oriental parts. Played with Lon Chaney in “Bits of Life”. (A very similar reverse text appears on Phillips “Film Stars”, as well as on Premier Tobacco “Stage and Screen Personalities”, and on Facchino`s Reel Star Chocolate Wafers “Cinema Stars”, it is possible that this was the approved press release that was circulated to any card issuer). “Bits of Life” was released in 1921 and was several short films shown together, but it was the first in which her name, "Anna May Wong", is listed on screen. Sadly this film does not survive. The next year she starred in one of her best films, “The Toll of The Sea”, a title she used for her autobiography. Sometimes quoted as being the first technicolour film, which it was not, that was “The Gulf Between” (1917), it was the first Technicolour film to be filmed in Hollywood, and the first shot by a new process that meant it could be shown on any projector, so additional equipment did not need to be sent with the film reels. And it still exists, for viewing, at The Internet Archive. The film was directed by Chester M. Franklin, it was written by Frances Marion, though heavily based on Madame Butterfly, with the action moved to China from Japan. In the film Anna plays “Lotus Flower”, a Chinese girl who finds an American man (Kenneth Harlan) on the seashore. They fall in love, but he cannot marry her, so leaves, not knowing he is also leaving his future son. He returns to China some time later, with his wife, and they take the boy back with them, after which Lotus Flower drowns herself in the ocean that had given her happiness, and taken her son. The “son” was played by Priscilla Moran. I do not think this film is depicted on a cigarette card, but if you know different, please do tell us.

What some consider her greatest ever film was in 1929, called “Piccadilly”, it is cited on Rothmans, where it says she “Has acted in London and played in many British films, including “Piccadilly” and “Flame of Love” (released the following year, as “THE Flame of Love”) Is now under contract to Paramount”. The Sinclair set tells us this was “her first talkie”, and Godfrey Phillips “Film Favourites”says “That Anna May Wong is now starring in British pictures will be welcome news to her many admirers on this side of the Atlantic. Her recent appearance on the English stage proved that she was, in person, as charming and attractive as her previous films had indicated.” She had travelled to England to make it for British International Pictures (B.I.P.) but it was not a pleasant experience as it suffered from the censorship rulings which would eventually see her quit film for good. Here, it can be told that she so bewitches the nightclub owner that he leaves his girlfriend for her, but this seems quite baffling for they are not close, and never even kiss The reason for this was that at that time, inter-racial relationships were not allowed to be shown on screen. And this was something that almost certainly ruined her career.

She spent some time touring in Germany, and appeared in “Shanghai Express” (1932) as Hui Fei, with Marlene Dietrich, which was later remade as Night Plane from Chungking (1943) and Peking Express (1951), and at this time she appears on many German cigarette cards, as you will see on our display boards (once I fathom out how to make them – which may take me into next week). However most of these do not carry any biographical text as they were designed to be stuck in special albums.

Her next film was "A Study in Scarlet" (1933), a Sherlock Holmes film - and she had second billing under Reginald Owen. This film was based on the first story to feature both Holmes and Watson, which was published in 1887 as part of a Christmas Annual and appeared as a book the following year. However do not go looking for any of the book in the film, as it only uses the names of some of the characters! And she appears only very briefly. “Limehouse Blues” followed in 1934, she played Tu Tuan, and dances with George Raft, who is made up to resemble a Chinese character, and the film also stars Jean Parker, (this is the last film mentioned on our Carreras and Gallaher cards). In 1934 she also made “Chu Chin Chow”, which features on the reverse of Phillips Film Stars and on their “Film Favourites”, where it says “Her new part of Zahrat in “Chu Chin Chow”, the Gainsborough Picture now being made at Islington by Walter Forde, is bound to give full scope to her very remarkable talents.” And in fact the Gallaher card says “Her portrait depicts her as Zahrat in the British Picture, “Chu Chin Chow”, which makes this the only card with a picture specifically identified to a film.

After that, she returned to the United States, at the height of her fame. She wanted very much to play the leading actress in the film of a popular book, by Pearl S. Buck, which was called “The Good Earth”, and it was written about a Chinese husband and wife. Unfortunately for Anna May Wong, the male lead was cast as Paul Muni, and he was an American of Austro-Hungarian descent. This meant that to comply with the current anti inter-racial rulings, his wife would have to be played by a white actress, so the role was given to Luise Rainer, an American of German descent. The most ridiculous thing is that once filming started these stars then had to endure hours of being plastered in “yellow face” make up, and having their Western features concealed by special effects. Anna May Wong was told that she could play a lesser role, of a hateful and scheming Chinese girl who wronged the couple`s son, but she turned it down. Even more gallingly, Luise Rainer won the Best Actress Oscar.

Anna May Wong never really regained her love of motion pictures after this, though she continued to act until 1960, appearing on stage, and television, where she presented “The Gallery of Madame Liu-Tsong”, (using her actual birth name). This was a series of ten short films about an art dealer who was also a detective; it was the first American television series with an Asian-American leading lady, and the inspiration of many other series, still providing a staple of prime-time entertainment today, where a character has a normal job, but also investigates crime as their sideline. Despite its importance to television history, a second series was never made and it appears all episodes of the first are lost.

In 1960 she became the first Asian American actress to be immortalised on the Hollywood Walk of fame. She was already in frail health though,which had forced her to give up a plan to return to the big screen in "Flower Drum Song", a filmed version of the musical. She died on the third of February 1961, of a heart attack in her sleep, and is buried with her mother at Rosedale Cemetery in Los Angeles, California.

To close, a couple of oddities -

Our Carreras card tells us that her “Favourite game is golf.” There seems no basis to this, unless anyone else knows more!

And then, finally, there is a really unusual card, which may escape the attention of fans. This was issued with Sarony Cigarettes out of New Bond Street in London. Imagine yourself idly looking through the set of “National Types of Beauty”, 36 Actual Photographs, and suddenly you spot a familiar face. There is no title to the front, but if you persevere, and flip over, the back description says “The unique characteristics of the Oriental type of beauty are charmingly portrayed in this picture of Miss Anna May Wong, the popular Cantonese film Actress”. Its number 26, by the way!

We hope that you will now go off and hunt out a few of the films of this important leading lady, and maybe consider adding a few cards to your collection.

Thank you for reading, and thank you to “bowbara” and to Mr. Dennis Owyang for their assistance.

And here, for your enjoyment, is a gallery of her cards and postcards 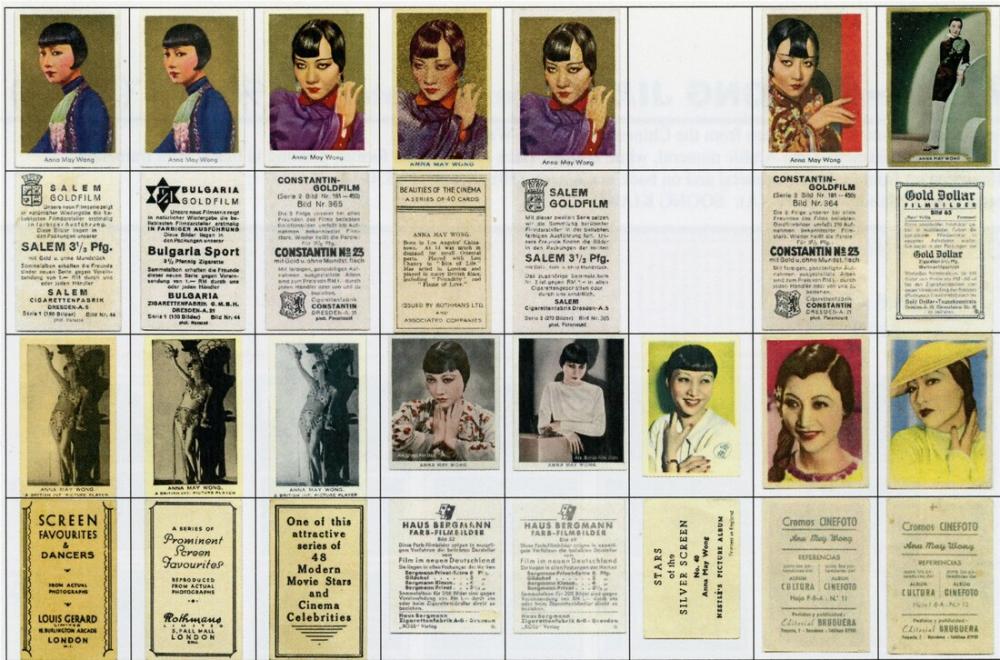 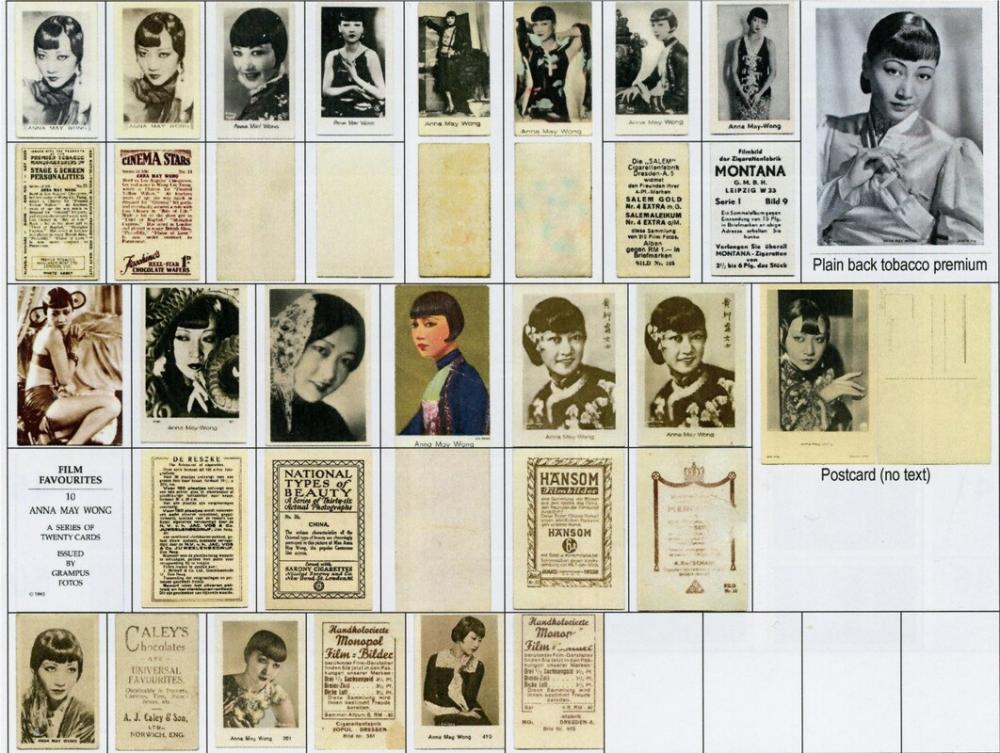 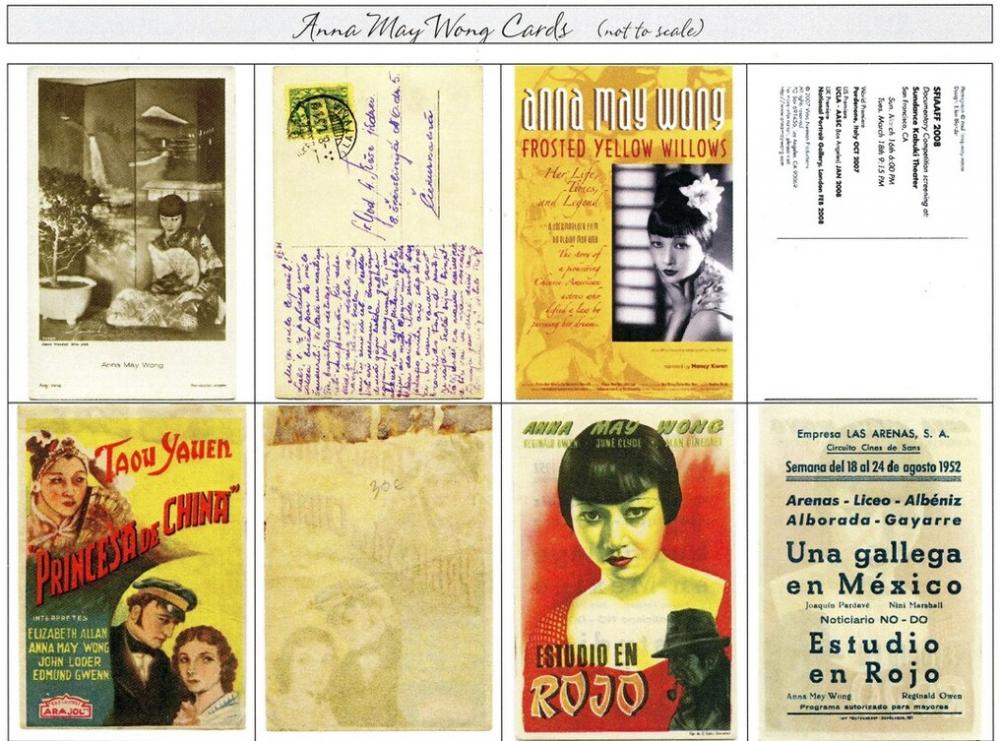 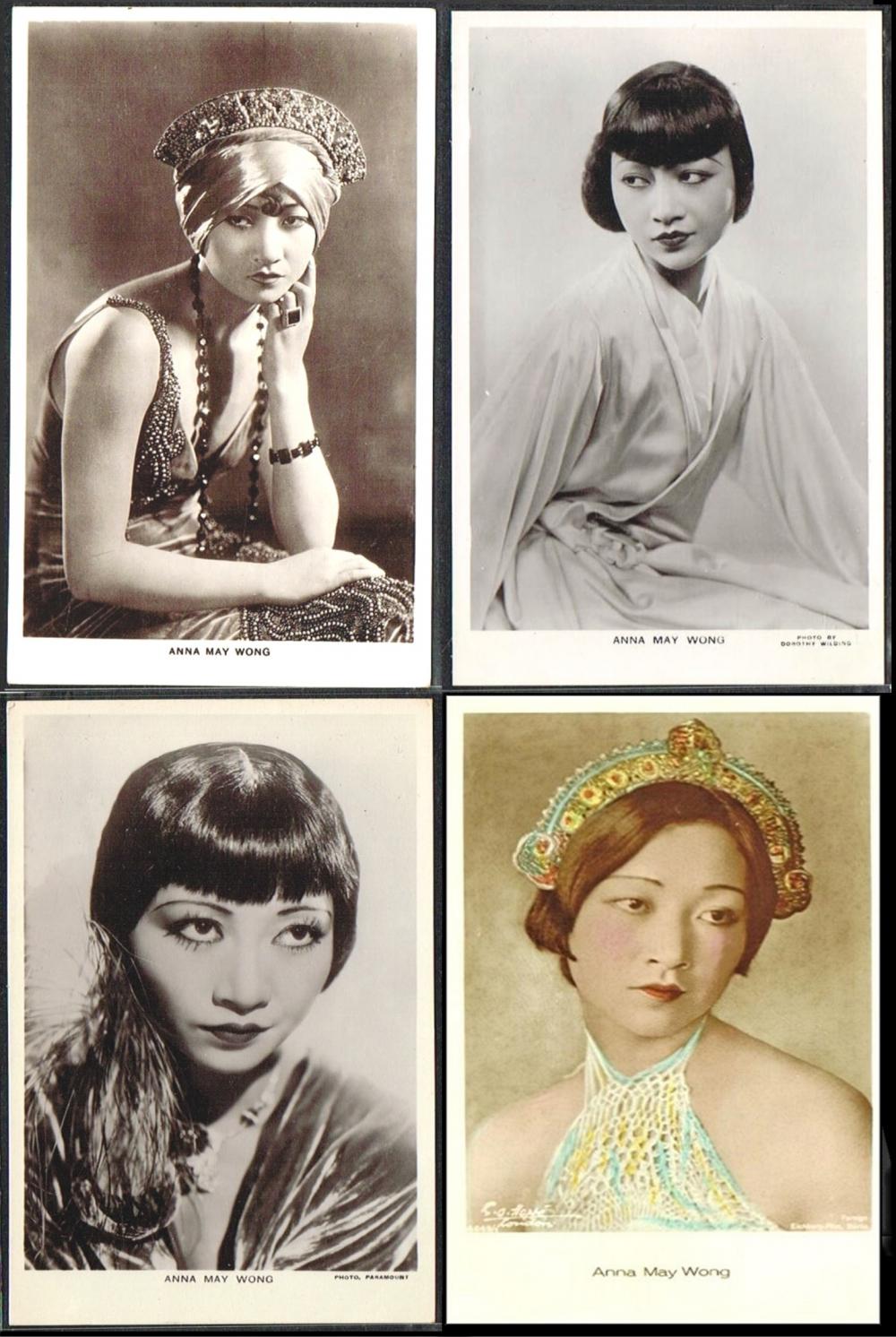 The top two and bottom left hand card were all issued by "Picturegoer" magazine - look out for the copy issued in 1926 which features her biography, specially written for it. The card top right is from a "Photo by Dorothy Wilding"

The bottom right hand card is one of the German postcards by Ross Verlag, the signature on the left is E.O. Hoppe, or Emil Otto Hoppé, a very famous photographer who was born in Berlin but worked in Britain. There are other photos that he took of her in his online archive