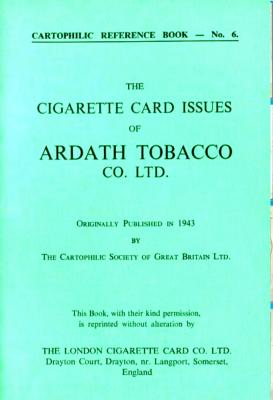 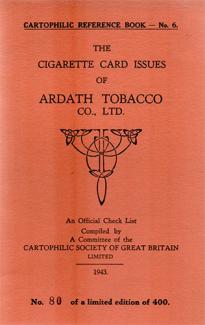 For our sixth Reference Book we returned to a single issuer, Ardath. Most collectors agree that the reasoning behind this was that Ardath was the next major issuer in alpabetical order from Anstie, which had been the final section of the previous book.

The first mention of a work on Ardath was in "The Bulletin" of December 1941 (Vol.2 No. XXIX) - on the front page, under the heading of Research, where it states that the Research Committee "announce they are now investigating the issues of Abdulla, Adkin, Anstie, Archer and Ardath Tobacco Co. Information relating to any sets not catalogued in recognised catalogues or other data will be appreciated. The findings of the Committee will be published, probably in pamphlet form, after work has been completed." The work on Abdulla, Adkin and Anstie was used to produce RB.5 and Ardath became RB.6, both in 1943. The work on Archer never materialised.

This booklet was written by Eric Gurd, who was also an author, and editor of our magazine, and it was published in 1943 as a limited edition of 400 copies, printed by Parker Brothers.

By the time that our John Player Reference Book, RB.17, was published, in 1950, Ardath had joined the ranks of those no longer available, and it merely stated "covered copies out of print. A few un-covered copies are still available"

Many years passed until a new reprint was produced; at that time the decision was made to redo the original red cover, as shown, and make it into a plainer green format, but all the interior text remains the same.