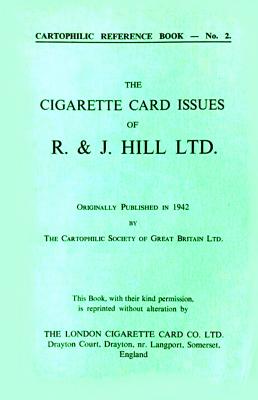 This was our second Reference Book, covering the cards of R & J Hill, and written by Eric Gurd, author, and editor of our magazine. It was published in 1942, again as a limited edition of four hundred copies, for members only, and, like its predecessor it was not illustrated. Its first mention was on the front page of our magazine "The Bulletin", (May 1942 - Vol.3 No.34) : "The next reference book, dealing with the issues of R. & J. Hill Ltd., is in the press, and should be ready about the end of May. This will be much larger than Faulkner's, and it is expected the price will be in the neighbourhood of 2/6d. In view of the number of pages, and paper shortage, it is not proposed to issue an interleaved edition." Having a second book did cause a problem, of members wishing to keep to the same limited edition number. We had been wise enough to keep a record of the owners of the Faulkner books, and asked that any buyers who wanted that same number should order early, before the books even left the press. Those numbers would then be reserved in their name, with the unclaimed being issued to new buyers in numerical order. It was stressed not to send any money now, though some buyers were in credit, having paid for an interleaved copy of the Faulkner volume after all were sold, and receiving the cheaper copy instead. There were also some suggestions that collectors might like to send, say 10/-, in advance and as new books were issued they would automatically receive "their" numbered book. I have not yet found out whether this was ever done.

The Hill book was once more printed in Great Britain by Parker Brothers, St. Albans, Herts, and produced with a slightly different shade of grey cover, shown right, on the inside of which was the same quote from Thackeray as had appeared in the Faulkner volume, similarly followed by an Editor's Introduction, a short biography of Hill's, and slightly different acknowledgements to "a number of collectors who have assisted with in compilation, and to tender grateful acknowledgements to the publishers of Cigarette Card News [The London Cigarette Card Company] from which certain information, supplied by Messrs. Hill's in the past has been extracted." This was dated April 1942 and signed with the initials E.G. [for Eric Gurd]. In "The Bulletin" for June 1942 (Vol.3 No.35) it was announced that Cartophilic Reference Book, No.2 was "...now ready for distribution. As already announced this deals in a comprehensive way with the cards of Messrs. R. & J. Hill Ltd., and judging from pre-publication orders the limited edition of 400 copies will soon be disposed of. The book is packed with information on a very popular maker's cards : there are over fifteen hundred lines of print - 28 closely printed octavo pages - and many problems are cleared up as well as data provided on sets which have not been previously chronicled. Unnumbered series are listed in detail ; dates of issue are provided, together with printing processes and description, and altogether the information is invaluable to every serious cartophilist. The price of this book is 2/6d., post free, and it may be had on receipt of remittance from Mr. Eric Gurd . . . To avoid disappointment please order early. There are no interleaved copies." A little further in the same edition was a note that if you bought both reference books, 1. and 2., at the same time, they could be mailed together for 3/6d. post free, saving 3d. This followed two glowing reviews, with more in the July edition (Vol. 3 No.36), p.289. along with a printed promise "Other books are in active preparation, and you can place a standing order to recieve new books as they appear, if you wish to. Even if you are not immediately interested in the makers dealt with, you run the risk of being ignorant without these books. This is your opportunity to build up a Cigarette Card Encyclopaedia - the most ambitious ever attempted - by a subscription method. Orders accompanied by remittance should be addressed to the Editor. RB.2 was another immediate success, so much so that by the time our James Taddy Reference Book, No.12, was published in 1948, Hill was listed as "Now out of print *". The asterisk is explained as "only un-covered copies available for new members of the Society." This must mean that the innards were being duplicated or reprinted, presumably from the number one in our library, but its decorative, slightly thicker covers could not be. Many years passed until the book was reprinted. At that time the decision was made to redo the cover into a plainer green format, and this is what we now sell in our bookshop. However, all the interior text remains the same. [LIBRARY CODE H.28]