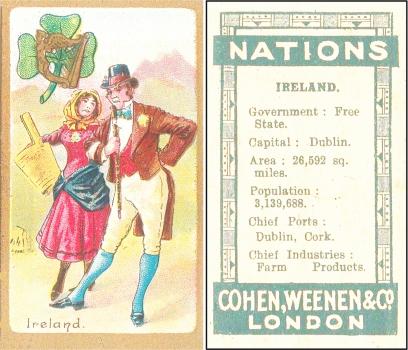 Ireland gets a site all of its own for historical reasons, because in the November 1933 edition of The London Cigarette Card Company magazine "Cigarette Card News” (Vol.1, No.2, p.14) there is a section on the inaugural meeting of the Dublin Cigarette Card Club, which the LCCC (and I) believe was the first cigarette card club to be "regularly constituted”. Their first meeting had taken place on the 10th of October, 1933, after great efforts by Mr. H. D. Wilson of Donnybrook, who was described as "the well known Dublin collector", and who was going to be in control of the club until such a time as the number of members allowed for a proper committee to be formed. Two other members were mentioned in the text, Messrs. J. Walsh, and D. Lawlor.  In the March 1934 edition of “Cigarette Card News” (Vol.1, No.6, p.69) a letter appeared from Mr. Wilson, pointing out that although the club was called "The Dublin Cigarette Card Club", any collector from the Provincial Districts of the Irish Free State, and Northern Ireland were welcome to join. Subscription was 2/6d a year (I am not sure if this was just for these areas). Another first was also mentioned, this being that if you were a member, you would get discounts on buying cards through the club. The June 1935 edition of “Cigarette Card News” (Vol.2, No.21, p.103) contained an article of almost a page in length, entitled “Irish Issues”. This was primarily a list of sets issued in the Irish Free State. He said that at one time once sets had finished their run in England they would be inserted in packets destined for Ireland, but recently packets for Ireland had started to contain sets uniquely of Irish interest. He cites Players “Irish Place Names” and “Treasures of Ireland”, plus Wills “Shannon Electric Power Scheme”. After this there was a short interlude when the English issues returned, but then Wills had issued “Irish Holiday Resorts” and “Irish Watering Places”.  This raises two interesting questions as the Shannon set is recorded to have been issued in March 1931 (and this date comes from Wills own records). However the Holiday Resorts is stated to have been issued in May 1930, so that makes the above dating out of order. And "Irish Watering Places" is a set I have never heard of and cannot find. Mr Wilson then speaks of the sporting cards in a way that you can tell he was not keen, but he does state one fascinating fact which you might not know either, that being that the “positions and movements in [Player`s] Boxing were posed by various Free State Army and Police Boxing Champions”. Actually it says this on the cards but if you haven`t come across the cards you may not know. Sadly I have no further records of this club, so it may well turn out to have allied itself to the Cameric Club, which began in 1935, or it may have remained totally independent. But are there any collectors who know any more about this club, or these people, especially “Mr. H. D. Wilson, the well known Dublin collector”? If so, please expand our knowledge.

Now although we have no clubs or branches in Ireland at the moment, there have been others in our past, so lets have a chat about them, starting with...

Little is known of this club, but its first appearance is simply by being listed in the Pen Portrait of C. B. Fairbrother of Croydon, which appears in The Cartophilic Society "Bulletin" magazine  (Vol.1 No.XVI, November 1940, p.129), under item 4. Societies and Clubs that the member belongs to.
We have just discovered they had a club magazine called 'The Raconteur & Cartophilist' which was first issued in October 1940. Issue 2 was in February 1941, 3 in September 1941 and 4 covering January to March 1942. More on these will follow.
In the June 1941 edition of "The Bulletin" (Vol.2 No.XXIII, p.183) there is a small unheaded piece which simply states that “The Secretary of the Northern Ireland Cartophilic Club, Mr. A. W. Richardson, writes to say that the activities of the club have been curtailed owing to enemy action in Northern Ireland. He says they are not suspended entirely, but he cannot deal with letters, etc, as quickly as he has previously done.”. Then in September 1941 (Vol.2 No.XXVI, p.207), there is an interesting article about John Player & Sons “Cycling”, a series of fifty, prepared for circulation in Ireland. The author is The Hon. Secretary of the Northern Ireland Cartophilic Club Mr. W. S. Richardson, so either these initials are a typo or a relative has taken over.  The club must have survived for a bit longer as it was also listed in the Pen Portrait of R. C. Allen of Cheshunt, which appears in "The Bulletin" (Vol.4 No.42, January 1943, p.340), again under item 4. Societies and Clubs that the member belongs to. And, according to "Cartophilic World" (Vol.3 No.30, August 1945, p.237), the follow up to "The Bulletin", Mr. W.S. Richardson holds another honour in Cartophily, for it was he who discovered the set of Belfast Ship Stores Co. Ltd`s “Dickens Series”, or at least the first card from that set ever recorded. It was the card of Mr. Pecksniff, by the way. However that`s where the trail of this club goes cold.

The first mention of this was in the May/June 1977 edition of “Cartophilic Notes and News” (Vol.7, No.75, p.2155) as part of a Branch Report concerning the Timperley meeting of 17th April, where it says “John Powell (Dublin) wants to know if there are any Irish names for a little gathering over there”. Obviously this recce had gone well as in the January/February 1979 edition of “Cartophilic Notes and News” (Vol.8, No.85, p.2482) This Society appears in the Branch section, giving the dates for 1979 (14 February, 11 April, 13 June, 12 September, 14 November) to take place at the North Star Hotel, in Amiens Street, and the Branch Secretary was Mr. J. Powell of Tallaght, Dublin. They were a non-affiliated Branch, and also used to simply call themselves “The Society of Ireland”. Then in the January/February-March/April 1987 edition of “Cartophilic Notes and News”, No.141/142 they are no longer in the Branch list.

However, if you look closer on that page, they were still running; they had just changed their name to the Dublin Collectors Club, with Mr. J Powell still listed as secretary, and at the same address. They now met once a month, on Tuesday nights at 8 pm, but no venue was given, the text only said “Contact Secretary for details”. But in 1990, “Cigarette Card Monthly” printed that "Dublin is no longer a regular club venue, but there are collectors and card sources, and J Powell (who was still at the same address) is a fount of all knowledge regarding the scene in Eire".

So over to you! Mind you since I wrote this I have amassed "a few more" vintage card magazines, which I am slowly working through to transpose the info from them into a more readable form which will be accessible to all readers, not just those who own the actual copies. So if you know any more info on these, or any other clubs, or have any pictures or related ephemera, do drop us a line. Many thanks.