The Story of our Magazine 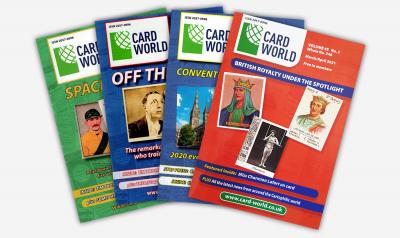 I have often pondered on how far we have come, but it is only recently that I realised quite how far this was, and only then when I acquired a bundle of vintage magazines, quite on a whim. I was so fascinated by the discoveries that I thought it would be fun to share them with all our readers, whilst also, thinking, hopefully, that some of you may be either able to answer the questions I still have, or provide me with scans, or even copies of those I miss ?

The beginnings of this article was actually supplied by a short piece in “Cartophilic Notes and News” Vol. 7, No.73 (January/February 1977), written to mark the change of editor from T.E. “Tom” Kempshall to Douglas Eyes. However I have expanded and corrected that as I acquired more vintage copies, and will continue to do so.

By the way this page will eventually also "cover" links to magazines issued by our branches and clubs, plus independent clubs, and dealers, but let us start with our own, and right at the beginning, in 1938, when there was a movement to start a card collecting society based on scientific rules, to be more concerned with research than values, and to not directly sell cards through its pages at all. This idea had been bubbling away for some time, and was a hot topic amongst the attendees of the inaugural Cameric Cigarette Card Club’s Annual General Meeting on the 8th of October 1938. Things moved relatively quickly after that, and by the end of 1938 this new Cartophilic Society had not only been formed, but had conducted their own first meeting.

Then, on the front page of Volume 6, issue 64 of the London Cigarette Card Company’s own magazine “Cigarette Card News”, dated January 1939, there is an editorial which contains a quite amazing offer:

“Now that the Society is an established fact, the proprietors of the CIGARETTE CARD NEWS feel that they should do their part in assisting its progress. No doubt in the fullness of time the Society will be able to run a journal of its own - we hope this will happen in the near future - but it is obvious that such an undertaking would be beyond its means or capacity at the present stage [so] we have pleasure in announcing that, commencing with the February issue, the CIGARETTE CARD NEWS will be enlarged by the addition of four pages, which will be placed at the disposal of the Society, without any increase in the price of the journal.”

You may be interested to know that price was three-pence.

This system of sharing the Cigarette Card News magazine ran for just a few months, then, in issue Vol.6 No.70 (July 1939), on page 212, appeared a further astounding announcement:

A MEMBER (who wishes to remain anonymous) has donated a sum which will render possible the publication of a monthly Bulletin dealing with the activities of the Society. This will be distributed to all members free of charge and will contain the fullest possible reports of all meetings, lectures delivered, forthcoming programmes, etc., competitions and other matters of interest to members. The first number of the "Bulletin" will be issued on 3rd July. The Council of the Society are sure all members will appreciate this very generous gesture, which will enable the Society to have its own organ of opinion and publicity.
By order of the Council,
C. L. PORTER, Hon Secretary

C.L. Porter was not just our Hon. Sec., he was the Secretary of The London Cigarette Card Company, and had been Editor of their “Cigarette Card News” from 1933 to 1937. On the opposite page to this was further information, as part of the notes from the Council Meeting at Ye Olde Cock Tavern, Fleet Street London EC4, which had taken place on 15th June 1939. This said:

“...An offer of a donation of £15 from a member who wishes to be anonymous to cover the cost for one year of issuing a monthly Bulletin by the Society was gratefully accepted...”

I have a reasonable suspicion as to whom this anonymous donor was, but will maintain their secret. However, if they are watching over us, as they may well be, thank you from us all.

“The Bulletin : official organ of The Cartophilic Society of Great Britain”

This started at Volume 1, Number 1, and was issued from 30 Wellesley Road in Chiswick, London, the home of the London Cigarette Card Company. The first editor was Eric Gurd, a keen researcher on cards and their issuers, with a special interest in Robert Peacock Gloag, about whom he even wrote a book, "Prologue to Cigarettes. The story of Robert Peacock Gloag, England's first cigarette maker". This was published on the first of January 1943.

The Bulletin was not printed but duplicated, and it was a larger size than the "Cigarette Card News" had been. It had just four pages, and the first issue was dated June/July 1939; this was released to members on the 3rd of July. How close to war that was to make the leap into such an undertaking, yet the magazine was published throughout, despite wartime shortages, restrictions on paper and raw materials, air raids, bomb damage, and contributors going off to war. Many contributors and letters were published from serving personnel, prevented from being with their cards, but still keeping their collecting spirit, despite their cards being damaged or destroyed by the blitz, or donated by well meaning relatives to the waste paper fund; and some letters appear from collector’s relatives, who have lost their contact with our world for all time. One of those lost was Eric Gurd’s own son, Pilot Officer Ronald Edward Gurd, RAFVR, who was killed on active service on the 14th of October 1942.

The Bulletin continued until issue 43, dated February 1943. There is no word in that edition as to it either being the last, or to it having a new title from the next edition. But the next edition was...

As it was a turning point, back numbers of the Bulletin were listed as being available for sale to complete your collection, the cost for issues 8-43 being 10/-. In fact, in 1943, when bound volumes of The Bulletin were finally made available to members it was at a tiered rate, either a volume containing just issues 8 to 43, available from stock, or a more expensive volume which actually included the first seven issues, specially reprinted to a smaller scale so that they matched the other magazines, and bound in at the same time.

Eric Gurd stayed on as editor until 1948. His successor was Edward Wharton-Tigar, and in September 1949 (Vol.8 No.79) Wilfred T Wicks was appointed as honorary assistant editor, in order for Mr. Wharton-Tigar to have time to continue writing the original Cartophilic Reference Books, (the production of which he had taken over from Eric Gurd), and the new World Indexes.

In September 1952 (Vol.9 No.101) Commander A. M. “Bunny” Rundle D.S.C. was inducted as a Deputy Editor, this must have been a typo as it was later changed to D.S.O. Then in September 1953 (Vol.10 No.207) it was announced that Commander Rundle and Mr. Wharton-Tigar were to be joint editors, splitting the work between them and deputising if one was called away on other tasks.

It is often written that Volume 12, Number 130 (July/August 1957) was the last edited by Mr. Wharton-Tigar and the first by Commander Rundle, but this is incorrect. That edition merely contained the news that Mr. Wharton-Tigar wished to be relieved from office as his work was sending him to Canada, plus an appeal for a new editor. It also said that in the interim the content would be provided by E.C. Prior and W. J. Wicks. This appeal was not wholly successful but a spot of coaxyorum was applied, and Volume 12, Number 131 was once more edited by Commander A. M. “Bunny” Rundle D.S.O., who had been convinced to return after two years absence, and actually says in his first editorial that this was because “no-one else would volunteer”.

September 1958 (Vol.12 No.137) had sad news, Mr. Wicks had been ill and his doctors had advised complete rest. He therefore, reluctantly, was stepping down as Assistant Editor.

In July/August 1959 (Vol.13 No.142) Commander Rundle asked to be relieved of his duty, this was because his business had  expanded to a point that he could no longer serve us. This was his final issue, and F.V. “Franz” Blows took over for issue Volume 13, number 143 (September/October 1959). He was a familiar name to most of the current members as he had been the joint founder of the Cameric Cigarette Card Club and also one of the original founders of the Cartophilic Society.

The last edition of "The Cartophilic World" was Volume 15 No.174, dated November/December 1964. The reason for this was that in 1964 the Cartophilic Society and the Cameric Cigarette Card Club had joined forces. And the result of that was...

The “Cartophilic Notes and News”

Once more the numbering reverted to Volume 1 Number 1, and it was dated January/February 1965. It also had a new editor, A. E. Arnold, nicknamed "Arch", who had edited the Cameric Notes and News immediately before Bill Wareham, and is recorded as having done an excellent job under the challenging circumstances of trying to combine two magazines whilst retain the best of both. One thing he did was temporarily enlarge the number of pages, from 20 to 24. And another was to change the title. He did this in a very clever way, keeping the link to both clubs alive, for our magazine had been “Cartophilic World”, and theirs “Cameric Notes and News”. However what a lot of our readers may not realise was that this was not actually a new title, as in the late 1930s The London Cigarette Card Company’s “Cigarette Card News” published a series of articles entitled “Cartophilic Notes and News”, which had been written by “Observer”. The question there is who was the pen behind the pseudonymous “Observer”? If anyone knows, do please tell us.

In 1969 T. E. "Tom" Kempshall took over as editor, he was a keen ornithologist who wrote many fine editorials on his feathered friends, but was also interested in the folklore of flowers, and the story of medals, both of which he intended to publish books about. I once heard that when he took over it was on the understanding that if not enough copy was available he could fill the space, and that he did, very admirably. He also saw that the cover was changed to a glossy board, printed in two colours, and that half tone pictures became the rule, not the rarity. He stayed for eight years, and forty-eight issues, and it is recorded that “he never failed to produce our magazine on time despite many periods when his health and mobility were often affected by illness”. His final issue was Vol. 6, No.72 (November/December 1977), and that was also the last edition printed at the Sidmouth Printing Works, on the Devon Coast.

Maurice Large became our editor with Volume 11, Number 117, March 1983, and a huge milestone was reached a short time later with Volume 11 Number 119, dated May/June 1983, when suddenly instead of our familiar white cover with the coloured stars, we gained what is regarded as our first pictorial cover – though it was just a large green solid amidst which was an image of a card.

Volume 35, Number 3 (May/June 2011) was important because it was a “double editor” edition. Peter Wright was retiring after four years, and John Devaney had taken his seat.

In 2014, there was another development, which led to the renaming of our website, and our magazine. Both would now be known as ...

The main change this time was that we did not go back to the start of numbering, so the first edition of this magazine is Volume 38, No.1 (whole No.303) and it was dated January-February 2014. On the first two editions of this, if you look closely, you will see that it says “Successor to Cartophilic Notes and News” below the title.