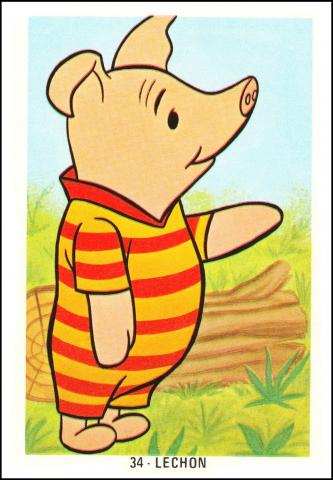 anyone know how many in the set ?

These cards are plain backed and measure 70 x 50 m/m. There is no issuer`s name on the cards, it is only on the packets, so if you just get the cards, or a card, it will be hard to identify. The packets are in Spanish and show Disney Characters to the front, with the wording “Galeria Walt Disney”. It was issued for the fiftieth anniversary of what are regarded to be the first Walt Disney films, eight animated shorts featuring fairy tale characters, these were filmed in 1922 in Kansas City.

Actually these cards are a kind of missing link between the card and the sticker, because they are cards, but they fit in albums, hence the plain backs. However, at that time, you had to supply the gluing agent, it was not just a case of peeling, nor licking.

Fler S.A. was founded in 1937 and was/is a publisher based in Calle Villabaso 9, Bilbao. It looks like that address now belongs to a housing developer. However several sites say they are still active in the publishing and games making field. They issued other cards and albums, including Disney`s Snow White in 1941 and also issued several series of cycling trading cards into the 1980s, plus this cycling board game which gives yet another address Gordóniz 44 - another dead end.