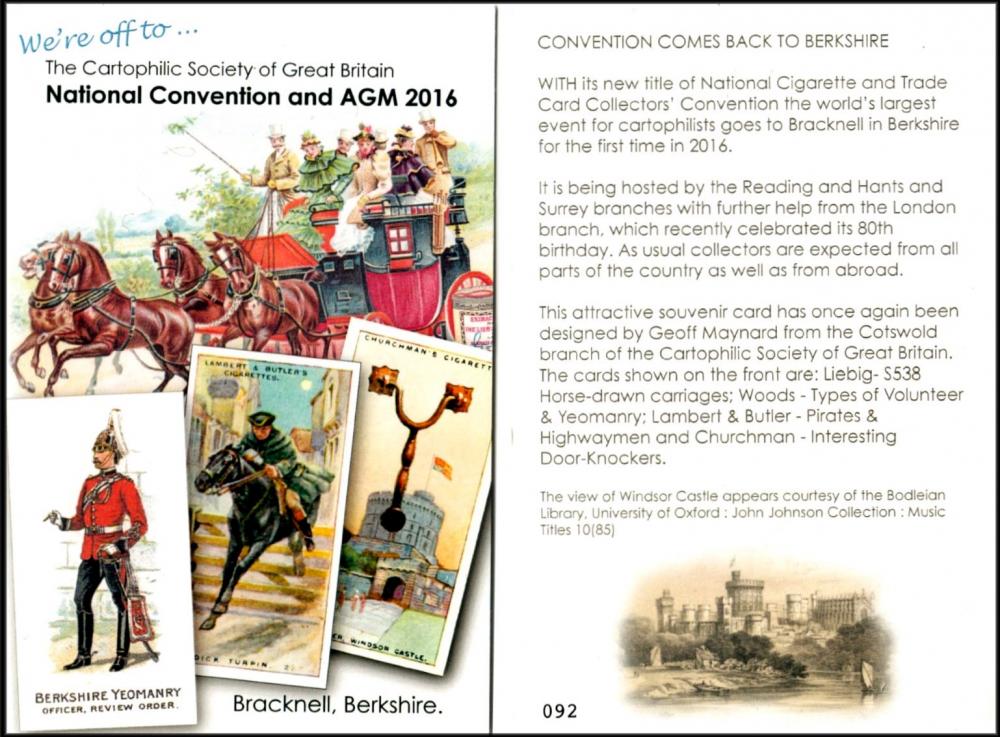 Held Saturday 30th April and Sunday 1st May. The opening times this year were Saturday: Members: 10am-6pm and Non-Members from 12pm-6pm admission £3 – and Sunday everyone was welcome from 10am-4pm but non members had to pay a reduced rate of £2. The next venue was announced as Manchester. Again no live auction followed the AGM, but all the lots had been available to view over the weekend from 1:30 until 3:30, and on the Sunday from 12:00 until 1:00, and bidding was also now allowed from non-members, though they would be subject to the levy of commission, which our member bidders would not. Interested bidders were to leave bids on the forms which would be freely available in the room. Or go home and bid in post or by e-mail, as the auction actually closed one week after the convention, on Saturday May 7th. Our reasoning behind this was to allow collectors the chance to spend more time in the main hall with the dealers! The undoubted star lot of this auction was LOT 38 – an extremely rare card with a catalogue value of £1,000. It was a Robert Sinclair Footballer (Black & White On Card) believed to be issued in 1898, and so rare that this subject, C. Watts of Newcastle, was unknown in 2003 when the British Tobacco Issues Handbook was compiled. Our auctioneer remembered that a few years ago some more cards from this set came to light in an auction in the Northeast of England that was advertised in Card Times. Anyway this card is now “recorded”, and will forever be found listed under H.399 of the British Tobacco Issues Handbook and on the updates available via the CSGB website. We could not remember the last time such a rarity was offered in our auction. Other highlights included Brigham Tobacco Growing in Hampshire, about which there was an article in our printed Society magazine, three Ogden Actresses Collotype, some unusual trade items, some of which are believed to be “unrecorded”, a set of Allen & Ginter Wild Animals of the World, twelve different lots of Kensitas Silk Flowers, some more of the Murai issues, Taddy, and Barratt cricketers, A & BC gum issues, various sets of Footballers, three types from the cult Mars Attacks series, three more Ed. Smith War Portraits, and a type from Wills Waterloo, which you ought to know was never issued because it might upset our French Allies as we headed into war.