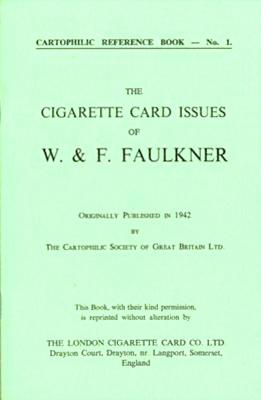 Our "Cartophilic Reference Book - No.1 : The Cigarette Card Issues of W. & F. Faulkner - An Official Checklist Compiled by A Committee of the Cartophilic Society of Great Britain" appeared in 1942. It was based on a listing of Faulkner issues in The London Cigarette Card Company's magazine "Cigarette Card News", and a follow up in our magazine "The Bulletin" (December 1941 - Vol.2 No. XXIX), which also had a biography of the firm, and detailed the sets, dates of issue, description,  number in set, generally accepted title, and the titles of the un-numbered cards within those sets. Our list was followed by a notice that "The first maker to be considered by the Research Committee will be Faulkner's, and it is proposed to commence investigations at the Ordinary Meeting to be held in February 1942." They requested that any member with additional information contact the Secretary by the end of January 1942 and also announced that "The object of the Research Committee is to compile a complete record of all this firm's cards and it is hoped all will assist to the utmost of their ability."

The following month, in "The Bulletin" (copy dated January 1942 - Vol.2 No. XXIX) it was reported that "Many compliments have been paid to The Society . . . members have stated over and over again that this has provided them with more information than they ever possessed before", though it was admitted they were aware that a considerable amount of information could still be added. Nevertheless, in April 1942, "The Bulletin (Vol.3 No.33) was able to announce "The First Cartophilic Reference booklet is in the press, and shortly after the appearance of this notice it will be ready for distribution." It was also noted that "The descriptive text includes subject titles of unnumbered series, dates of issue, method of printing, name of printer, etc, and fills twelve octavo pages, which are stitched into a stiff cover." 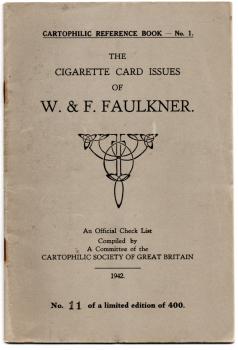 This important, groundbreaking booklet, originally covered as shown here, was to be a limited edition of four hundred copies, restricted as to purchase to members of the Cartophilic Society of Great Britain. There would be fifty interleaved copies (numbered 1-50 and costing 2/6d. each) and 350 un-interleaved copies (numbered 51-400 and costing 1/- each, plus 3d. postage). They firmly believed the booklet would be popular and early application essential, stressing that orders must be sent with full payment, and would be executed in strict rotation. It was also not possible to request a specific number, only that "early numbers will be secured by early application." They also stated something rather strange, that "The work will not be reprinted in its present form".

My copy, shown here, is one of those interleaved copies, which simply means that between every pair of printed pages there is a blank page inserted, for the owner to add notes and updates. And it is quite an early one, being number 11. Are there are any even earlier ones still in use? Do let us know. By the way, number 1 was not for sale; it was to be preserved, for all time, in the Society Library. Another intriguing find is that, according to "The Bulletin" of May 1942 (Vol.3 No.34), "A record has been kept of all the owners of [these] booklets" - I must find out whether this still exists, as it would be rather wonderful to know whose fingertips mine trace over.

There are no illustrations in either the interleaved nor the standard version, which were both printed in Great Britain by Parker Brothers, St. Albans, Herts, with a slightly thicker grey cover, shown here, on the inside of which was a quote from Thackeray "Here is the best I can do . . . I stand by this book, and am willing to leave it where I go, as my card." (The "book" was "The History of Henry Esmond" (1852) but it is not a quote from the novel, being instead part of a conversation between Thackeray and James T. Fields, Bostonian publisher and author. And it is extracted from a book called "Yesterdays with Authors", published in 1879. As to why it was used, I have no idea). The quote was followed by an Editor's Introduction, of which the opening statement was "This is Number One of the Cartophilic Society Handbooks", and by a short biography of the firm of Faulkner, not as exhaustive as the one from The Bulletin" of 1941, plus acknowledgements to "a number of collectors who have assisted with in compilation, and to the publishers of Cigarette Card News [The London Cigarette Card Company] from which certain data, supplied by Messrs. Faulkner in the past has been extracted." It was dated March 1942 and signed with the initials E.G. [for Eric Gurd]

There had been a few changes since the list in "The Bulletin" of December 1941; the word "Eminent" was no longer associated with the "Actresses", "Naval Expressions" and "Military Expressions" had been renamed to "Nautical Terms" and "Military Terms", and "Coster Expressions" to "Coster Series", whilst "Royalty Series" was now renamed as "British Royal Family", and "Prominent Racehorses of Today" had become "Prominent Racehorses of the Present Day", a title that the cards actually carried.

In "The Bulletin" of May 1942 (Vol.3 No.34) it proudly announces that "The response to this scheme was very satisfactory, and those collectors who have not applied for a copy are councilled to do so before the supply is completely exhausted. The demand for interleaved copies greatly exceeded the supply, consequently only the 1/3d. edition is available now."

It further announced that the next reference book, R. & J. Hill, was "in the press".

In 1944, on the inside back cover of the Gallaher Reference Book (RB.4) the standard version was still listed for purchase, at 1/3d, which was the same figure as originally quoted, just with the price and the postage combined. By 1948, all the copies had been sold, and it was listed as being out of print. In fact this was only partially true, because new members could buy a copy of the book without the cover. This was because there had only ever been four hundred original covers produced, after which the plates seem to have been destroyed.

By the time that our James Taddy Reference Book, No.12, was published, in 1948, Faulkner was listed as "Now out of print *". The asterisk is explained as "only un-covered copies available for new members of the Society." This must mean that the innards were being duplicated or reprinted, presumably from the number one in our library, but its decorative, slightly thicker covers could not be. In hindsight they were probably thinking it was not such a good idea to get the printers to agree to destroy that original artwork.

Many years later, it was decided to reprint these early volumes, many of which were becoming sought after by new collectors and changing hands at high prices. I have not found a firm date for this reprinting, yet, but I will. The difficulty over the missing covers and artwork was solved by designing an entirely new cover, the green one which appears in our bookshop listing. However the inside pages are exactly the same as in the original version, and it is also uniform as to size.