Well strange to say there are not so many cards of fireworks than I thought. There are some interesting ones though! 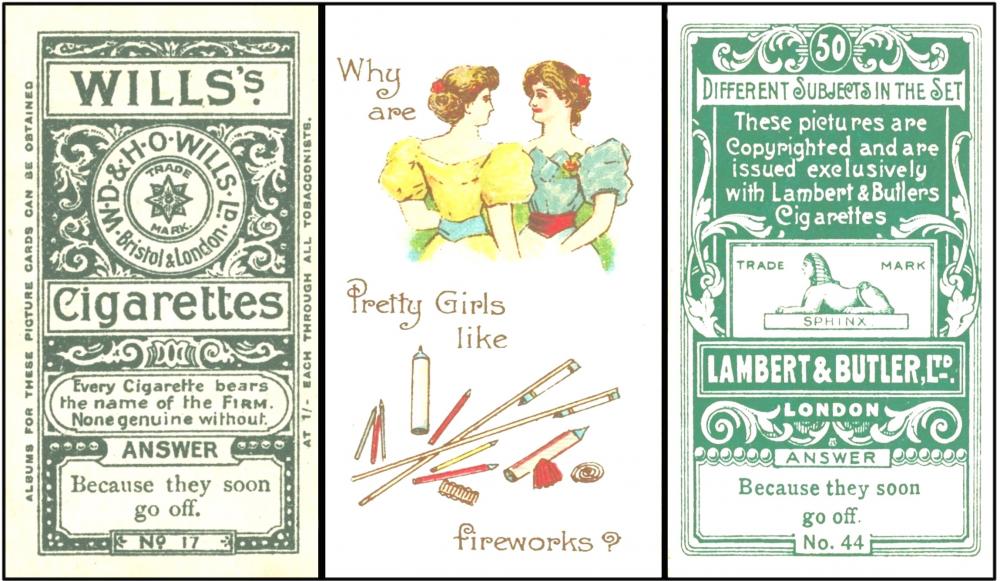 The earliest we have found is called "Conundrums".

This standard sized set of fifty numbered cards was issued by two companies. W675-572 was issued as in 1898 by W.D. & H.O. Wills, you can find it with and without an album clause printed down both sides the reverse - whilst L073-100 was issued by Lambert and Butler in 1901, and you can find that with a blue or a green back.

Each card shows two images and the conundrum is to find out why the two are alike. Card 17 of the Wills and card 44 of the Lambert and Butler show two "pretty girls" at the top and a rather good assortment of fireworks below, rockets, a Roman candle, a Catherine Wheel.

The question is "Why are pretty girls like fireworks" and the answer, on the reverse, is "Because they soon go off". Hmm. I suppose the original rather barbed intention was to mean "lose their looks" but perhaps the girls knew of this thought and they are going to make sure the thinker knows of another meaning - "to become very angry".

Anyway the fireworks are interesting.